FOAD Records is about to release the ultimate edition of S.O.D. “Crab Society Demos ’85″ boxset. To celebrate such an event, we reached original bass player Dan Lilker and asked him a few exclusive questions about this special deluxe edition of the most infamous NYC blip-core demotapes… 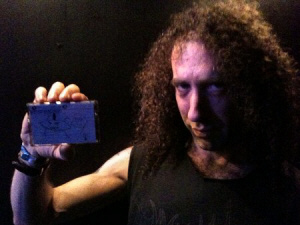 S.O.D. recorded just one demo, a bit of a curio going by the name of the ‘Crab Society North’ demo. ‘Crab Society North’ was recorded in the kitchen at the studio of Pyramid Sound.
Billy Milano said: “A lot of people ask us about this ‘Crab Society’ thing and it’s pretty fucking funny. You know I don’t know who has the tape, I’m sure Danny has.” This tape was recorded with a walkman that was placed in a speaker. There are 63 (short) tracks on this demo. Some tracks are interesting, because a few titles were (later) used by S.O.D. while others appeared on the first M.O.D. album. ‘Taint’ was recorded by Anthrax for the B-side of the ‘Indians’-single and appeared also on ‘Speak English Or Die – The Platinum Edition’ in a medley.

How did Crab Society North came about as a project?
Dan: The original Crab Society was just Craig Setari and me, it was inspired by very short NYC Mayhem songs like “White Clam Sauce”. We did the recording in his bedroom, switching off between bass and playing a cassette suitcase by hitting it wirh a drumstick and a screwdriver. We put a mic in the input of a cassette deck and put the input level on 10 (all the way in the red). We called the demo “Noise For Noise’s Sake”.
I played it for the other S.O.D. guys when we were in Ithaca, NY recording the “Speak English Or Die” album, and they thought it was amazing and wanted to do something similar. Since The Crab Society wasn’t a real band with permanent members, I decided it was OK for the S.O.D. guys to do that, but it was called the Crab Society North because Ithaca was north of Queens, NY where we did the first one. The recording technique was similar but a real snare drum was used. The line-up of The Crab Society North is the S.O.D. members. Originally S.O.D. was going to be called The Diseased before I was involved in it, it is a reference to Anthrax which is actually a disease, but Scott changed it to Stormtroopers Of Death so it wouldn’t be so closely associated with Anthrax.

How do you feel about seeing the terrific SOD’s Crab Noise tapes released on vinyl over 25 years later in such an elaborated/deluxe packaging?
Dan: It’s amazing! Never, ever, when we recorded this so long ago could I have imagined that it would see the light of day all these years later with such a cool layout!

CSN was one of the very first bands/projects using the ultra-short blipcore formula of songs lasting few seconds, what gave you the idea of doing something like this, had you heard any other bands previously doing few sec long tracks or was it something completely spontaneous and instinctive?
Dan: I think it was because NYC Mayhem (which Craig had played in) had a short song called “White Clam Sauce”, so we thought it would be cool to see what it was like to do a whole recording of very short songs. 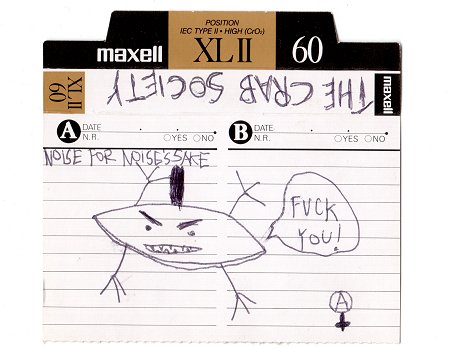 And what about the ultra-distorted sound of the bass, it anticipated a lot of grindcore and noisecore that came years later, what gave you the basic idea for doing such an onslaught of noise?
Dan: Hmmmmm…well i was already using distorted bass in Nuclear Assault at the time, and the inspiration for that was from Motorhead, Venom and Discharge. For this recording, we decided to make it even more radical-sounding to suit the noisecore attack.

Any word about the fact that songs like “Diamonds and rust”, “Vitality”, “Jim Gordon”, “Bushwackateas” would then become instant classics spread on thousand and thousand of SOD and MOD records?
Dan: Yeah, haha, the S.O.D. guys loved The Crab Society and thought some of the songs deserved more attention!

Are there any chances today of a S.O.D.’s return?
Dan: It’s pretty doubtful, it’s been over 10 years now…