In March 2018 I interviewed new M.O.D. guitarplayer Jason French. Last January I spoke with rejoined bassplayer Rob Moschetti. But although we've met a few times in 2014, I never did a real interview with drummer Michael Arellano who's in M.O.D. for 6 years already! So it was finally time now to also do a proper interview with M.O.D. drummer MICHAEL ARELLANO!

"I wouldn't be where I'm at today if it wasn't for the Texas Hardcore scene."

Hi Michael, how are you doing?
MICHAEL: I'm doing well. A little busy with life but well...haha. Thank you!

Last month it was announced that former M.O.D. bassplayer (also ex-Pro-Pain and ex-Generaton Kill) Rob Moschetti is rejoining M.O.D. after 24 years! How do you feel that Rob is back?
MICHAEL: I feel great about it. Knowing that he has history with the band and is an experienced player makes it comforting. By looking at some of the old live footage on YouTube, he's definitely a rager on stage. Very excited to be sharing the stage with him.

Did you meet already?
MICHAEL: Not in person. Only through the wonders of Facebook, haha. 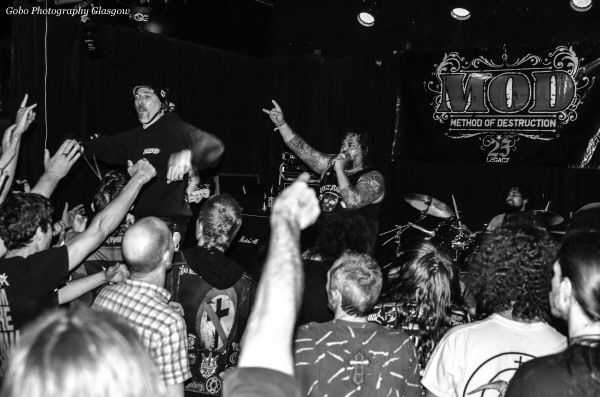 You became the drummer of M.O.D. back in 2013, right? So, you've been in M.O.D. for about 6 years now! Do you recall how and when you were asked to play for M.O.D.?
MICHAEL: In January of 2013, I played my first shows with M.O.D. Haha, wow! It doesn't even seem like it's been that long. Well, it all started when I noticed Billy at Agnostic Front, The Unseen and Ringworm in Austin at Emo's which I wanna say was sometime in 2004. We met that night and little did I know he was living in Austin. What really got us talking was when M.O.D. toured with Madball, Shai Hulud and my good friends in Bitter End out of San Antonio back in 2008. One of the nights on tour, Billy had asked Bitter End and our friend Kyle Wallace if they knew any drummers in the SA/Austin area? They all said that I was the guy. For that, I'll always love those dudes and be forever grateful they mentioned my name. Ever since then, Billy and I have been in contact. It was October of 2012 when I heard from Billy. I had just arrived to Houston to play a show with another band I'm in called Will To Live. While I was setting up my drums, I received a text from Billy saying “I'm looking to start M.O.D. again. Are you in?” Without missing a beat, I replied “Yep” haha. It's an honor being in a band with someone you followed since middle school. I'm still and will always be thankful given the opportunity.

Where did you play your first show with M.O.D.? What do you remember about that show?
MICHAEL: It was Frontier Bar in Austin, TX which is now called The Lost Well. We actually did 2 shows there back to back. I just remembered I kept telling myself “Don’t mess up.” Haha! It was nerve-racking but yet exciting.

Have you always wanted to be a drummer? What age were you when you became a drummer and what was your first band?
MICHAEL: Growing up...my dad, who has a huge heart for Rock n' Roll, would take me to all the big rock concerts. Not only did I become a huge fan of Rock and Roll but I wanted to do that too. It was either gonna be guitar or drums and the drums just clicked for me. I got real big into basketball as well but knowing that I didn't make the middle school or high school teams, I better just stick to the drums haha. Summer of 2000 was when I got my first drum set so I was 14. After that, I was jamming with anyone who had gear. My first band was with my friends Jonathan Lagunas & Ryan Kinsfather and we called the band 'Cause of Death'. First show was March 23, 2002...I was only 16 years old. 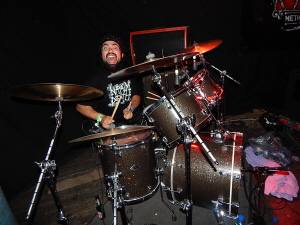 Is there one drummer (or musician) in particular that you really look up to, or who influenced you?
MICHAEL: Oh man, wow! There were so many drummers I looked up to such as Alex Van Halen, Neil Peart, Vinny Appice, Tommy Lee, Lars Ulrich, etc. Ozzy though, was and still is my #1, had some of the best drummers to back him up. Tommy Aldridge's solo on the Tribute record, forget about it. But when Randy Castillo came to the band, his style & attack was like no other to me. I definitely hold those 2 responsible for being a major influence on my drumming.

You've been on tour with M.O.D. a couple of times… In 2013 you did some shows in America and in 2014 M.O.D. toured Europe twice! In 2015 you played a couple of shows in the U.S. again, around the same time the last album was recorded. What were your favorite shows on both continents?
MICHAEL: Damn Sjouke, you're asking some pretty good questions haha. Lets start with the U.S. first. I wanna say my favorite show had to be in San Marcos, TX in May of 2013 at this venue which is no more called 'The Triple Crown'. It was pretty much a hometown show for me and my brother Mike De Leon who played guitar, so it was real cool and awesome to see all our friends, families and hometown support. The energy in that place was unreal. But the big one though was playing one of the main stages at Hellfest in Clisson, France...summer of 2014. It was the biggest stage and the biggest show I've ever played in my life. That feeling that I had inside, looking at the sea of people roaring from as far as you can see. All the hard work I've put in, my dream had came true and was put right in front of me. And no one could ever take that away. I'll remember that for the rest of my life.

Michael, I still remember when we met for the first time: this was at your first ever M.O.D. show in The Netherlands (at Iduna, Drachten), in February 2014. It was great to meet you all there, but how was it for you personally? Your first time in Europe I mean? Your first M.O.D. show? Your first European tour?
MICHAEL: I remember Billy talking about you before we got there and was like “This guy's been my webmaster for the past years and I'm finally gonna get to meet him.” Haha, which made me excited to meet you. It was a great feeling being in Europe with M.O.D. for the first time. Although, this was my 3rd visit to Europe. My first trip to Europe was in October/November of 2008 when I toured with another band I'm in called Die Young. That was amazing! Being in Europe for 2 months was an experience I'll never forget. But the first show with M.O.D. in Europe at Iduna, Drachten was badass to say the least. When we got word that it was sold out, I was like “Well, we’re off to a good start.” Haha! Everyone was so nice and very welcoming, it was one hell of a tour. We wouldn't have made it there without Laura and Luuk of Doomstar, haha. Lots of love to those two.

Since then the guitarist and the bassist have been replaced. Jason French joined M.O.D. back in March 2018 and now Rob Moschetti is back since January 2019. So, there's fresh blood in M.O.D.! You must be looking forward to share the stage with these guys, right?
MICHAEL: It's definitely going to be refreshing having French and Rob in the band. French and I have been jammin' together for the past 3 1/2 years now in his band Protest out of Dallas, TX as well as a Slayer tribute band called War Ensemble. I'd like to think within that time, he & I have gotten pretty solid and I already know when Rob chimes in, we'll be a force not to be reckoned with. So yes, I'm really looking forward to sharing the stage with these guys. 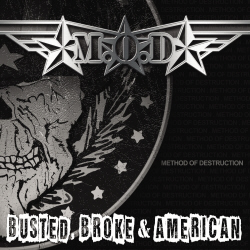 You played drums on the latest M.O.D. album ‘Busted, Broke & American’ which was released by Megaforce Records in 2017. It is a great record, in my opinion! Do you agree? What's your favorite song on this album and why?
MICHAEL: Yes! I truly believe it's a great record for fans of Metal and Hardcore Punk. I'm very proud of the work by all the guys and myself for making the record as best as we can. My favorite song on the album has to be ‘Billy Be Damned’! Why? Because that song is brutal and it has everything all in one. You have thrash, the core, even a little bit of blast and that breakdown at the end hits hard! I really do like ‘Shattered Dreams & Broken Glass’ as well. Just the feel of it, the “woahs”, it's catchy. It really is a great song. I like 'em all, who am I kidding? Haha.

Do you think M.O.D. will play songs from ‘Busted, Broke & American’ on upcoming shows?
MICHAEL: We talked about playing a few but yes, there are songs on the setlist. So you all are going to have to wait and see.

What's your favorite song to play live? And if there are more than one, just name them all, haha!
MICHAEL: I really enjoy playing ‘True Colors’. That drive and pace, it just grooves. ‘No Glove No Love’ is a fun one to play too. I love playing them all, haha. ‘True Colors’ though has to be my favorite.

Now that M.O.D. is complete again, when will you start rehearsing with the new line-up? And more importantly, when can we expect to see M.O.D. live? It's been too long!
MICHAEL: We're shooting for Spring as far as rehearsals go. Yes, it's been way too long, haha. I can't give too much away but we have a couple things lined up this year so expect to hear something soon.

Anything else that you'd like to share with us?
MICHAEL: I'd like to thank everyone who's been a part of this whole journey of mine. From my first shows with my band Indisgust to my first U.S. tour with Will To Live from Houston, TX. From my first European Tour with Die Young to playing main stage at Hellfest in front of 20,000 + with M.O.D. I wouldn't be where I'm at today if it wasn't for the Texas Hardcore scene. Love all you guys! Looking forward to seeing you on the road. Thank you!

Thanks Michael. See you soon on tour! 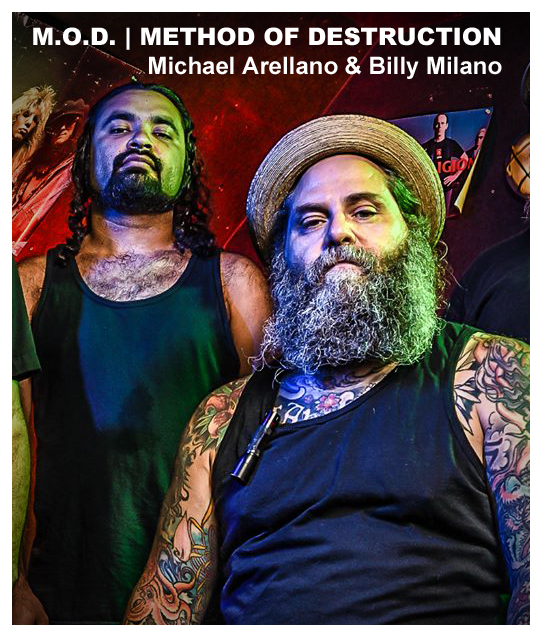