The S.O.D./M.O.D. mouthpiece discusses the day the laughter died

It only took 22 years, but S.O.D. finally took their own advice and killed themselves. Upon releasing the legendary joke-core crossover opus Speak English or Die in 1985, the Stormtroopers of Death—bassist Dan Lilker, guitarist Scott Ian, drummer Charlie Benante and vocalist Billy Milano—split up almost immediately after regaling the underground with instant meatball classics like “Kill Yourself,” “Fuck the Middle East” and the immortal five seconds of “The Ballad of Jimi Hendrix” (full lyrics: “You’re dead!”). Oh, they’d still drag their hairy tits out onstage every five to seven years to shit out a live album (1992’s Live at Budokan, recorded at the Ritz in New York) and a series of unwatchable home videos, but they totally fucking hated each other, so the reunions were always brief. To a man, they’d all return to their day jobs—Ian and Benante to Anthrax, Lilker to Nuclear Assault or Brutal Truth, and Milano to Method of Destruction, a spin-off band he started with leftover S.O.D. material in 1987. Fast forward to 2007: What by all accounts is S.O.D.’s official swansong is a sad fart called Rise of the Infidels (a live EP with four studio tracks—two of which are covers—tacked on the front) and Milano is set to unveil the four hundredth M.O.D. full-length, Red, White and Screwed. As if that weren’t enough, there was a rumor going around that our man had suddenly passed away. But when we called his place down in Austin, TX, he sounded pretty good for a dead guy.

S.O.D. is finally over with, huh?
Without a doubt, it’s done. There’s no denying it. But I think it’s important to recognize that it’s come full circle, back to the underground and not this huge cultish thing that everyone wants to grab 15 or 20 percent of. It’s back in the hands of the fans, and it’s only the real fans of the band that have stuck around. So I think this EP is a good way to say goodbye.

How long ago did it really end, and what happened?
It ended when it started, really. In 1985, Speak English or Die came out and Anthrax’s second record [Spreading the Disease] came out in that same time frame. Spreading the Disease sold something like 58,000 copies and Speak English or Die sold like 150,000 copies in the same period. They couldn’t explain it, because they did nothing to promote S.O.D. and they promoted the hell out of Anthrax. So all the guys in Anthrax who weren’t involved in S.O.D. were like, “We gotta stop this fuckin’ record from getting any bigger—it’s hurting our career.” So the record was its own worst enemy. There was no stopping S.O.D. from growing, but there was nothing keeping it going other than the fans who bought it. I mean, we did no interviews. Anthrax did everything they could to destroy it, and it came back to bite them in the ass. If Scott Ian and Charlie Benante had half a brain in their heads [when Anthrax play live] they’d be like, “Yeah, S.O.D.’s not here right now, but let’s do an S.O.D. song.” But they never did that. They said, “We’re not S.O.D.” A lot of people who know about my arguments and my personal grief with Charlie and Scott don’t realize that I’m not the one who’s bitter—they are. They’re the ones who had to live down people yelling for S.O.D. at their concerts for 20 years.

S.O.D. kept re-emerging, though. Would you temporarily work it out with those guys from time to time?
This is the funny thing: Even with M.O.D., I’ve never really been one to tour or give a full run of the music gauntlet. I’ve always been more of a behind-the-scenes kind of guy—management, production, I was even a part-owner of a studio at one point. Plus, I owned part of a granite company. So I never needed to do music for money—I did it for fun. Unfortunately, Scott Ian and Charlie Benante held the keys to the kingdom, and when they needed some publicity for Anthrax or needed to make some money ’cause they weren’t doing anything, the S.O.D. reunions would come up. And you’ll see they were specifically timed around Anthrax doing nothing. I will say this, though, much to their credit: When we needed to do a benefit for my friend who was murdered—Max Cavalera’s son-in-law, Dana—they agreed to it out of respect. We weren’t talking at the time, but we did it. And I honestly appreciate that they did that. That’s the kind of stuff that makes me go, “Why can’t these guys always be like that?” But whenever they need to rebuild some kind of buzz, they call. It happened again in 2004—I had talked to Scott briefly after [Dimebag] Darrell was murdered. Then Nuclear Blast called me up and asked if we were doing another S.O.D. record and I said, “Absolutely not.” And I know for a fact that Scott had approached them about doing a record.

So is it safe to say that you still don’t get along with them?
I’ve moved on at this point. They’re just not my kind of people. I’m an underground kind of person—I believe in the underground music scene and I believe in helping out underground bands. When someone asks me for an autograph, I believe in signing it, shaking their hand and talking to them. When someone comes up to me and says, “Hey, Billy—you’ve been so successful in the music industry—how did you do it?” I believe I have a duty to talk to them. So that’s what I do—that’s what I embody. But that’s not them. I realize that it’s my shortcoming that I don’t get along with them because that’s the way they are. That’s my fault—not their fault. They are who they are, and I am who I am. I accept it now, but I couldn’t before. I couldn’t understand why they didn’t wanna hang out with the fans; I couldn’t understand why they didn’t wanna have fun. It doesn’t make any sense. But to them it’s business. It’s all about money. And that’s great—but that’s not me, man. That’s not what I’m about. Consequently, I choose my own path. I personally don’t like Charlie Benante, but Scott Ian, believe it or not, actually emailed me concerned when there was a rumor going around a couple weeks ago that I was dead.

That was actually gonna be my next question. What happened?
Basically, one of my friends got on my computer while I was plastered—I don’t drink really, but I had played a show and I was a mess. I was talking with a bunch of people about how I wanted to die with my dogs. So a friend of mine logged onto my message board—he didn’t need the password because I have one of those instant cookie things or whatever they call them. I figure it’s the computer’s job to remember, not mine. So, anyway, the rumor went out that I had died, and Scott emailed me and he was concerned. I was genuinely touched and thankful, and I wrote back to him, “Thank you for the email. I appreciate your concern—it’s obvious that you care. And P.S. Tell Charlie ‘fuck you.’” And he wrote back, “I’m glad to see that even dead you’re pissed.” At least Scott and I have an understanding of each other. But Charlie is oil and I’m water and I’ll never mix with him, ever. And everyone’s happier that way, believe me—even Charlie.

Have you heard any other good rumors about yourself?
You know, I don’t think there’s a rumor that hasn’t ever been said about me. My favorite is that I was married to Alyssa Milano. I wish it was true—I would’ve left music a long time ago. I would’ve been on that show she’s on. What’s it called—Zapped? She’s on some show with a bunch of other hot chicks, and she’s a witch or something. Yeah, I would’ve been pretty happy being Mr. Alyssa Milano.

You’ve got a song on Red, White and Screwed called “Jose Can You See”—what can you tell me about it?
Basically, I have a couple of good friends from Mexico who are now American citizens, and they think people who come into the country illegally are giving them a bad name. It’s the same old story—one bad apple spoils the whole bunch. Now, I know there’s a huge underground movement of Mexican nationals who are now American citizens because they did it the right way, and they think it’s a bad policy to hand out amnesty to [people who enter the country illegally]. And I agree—especially when you’re gonna put ’em right on social security, a system that’s already bankrupt. It’s ridiculous—but that’s politics for you. Look, I don’t have anything against Mexicans. They’re showing up and doing all the work. And I’ve never had a problem with anyone who works for a living. I don’t care if you push a broom—if you get up every day and do it, I gotta admire that. It shows a lot of resolve. Just like it shows a lot of resolve to do things the right way. So I have no problem with anyone coming here if they do it through the right channels. If people come here illegally, they’re not doing it the right way, and chances are, if they don’t do one thing the right way, they won’t do another thing the right way. That’s fair. The guys who come here legally and become citizens—they don’t call themselves “Mexican Americans”; they call themselves “Americans.” That’s it. And they don’t like being lumped in with illegals just because they happen to be brown. 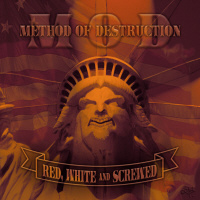 What about “Alphabet City Stomp”?
That’s one of my favorite songs on the record. It’s the first song I’ve ever written that tells a story. It’s about when I bounced at CBGB’s, about how I met Jimmy Gestapo from Murphy’s Law, about all the great times and good old days—and they were very good—and it’s about my fallen friends in the hardcore scene, like my friend Barry who was stabbed in the heart and left in a park. We found him with his boots missing in the middle of winter. Or my friend John Norquist, who was beat up and left on railroad tracks because he was a skinhead. He was hit by a train and killed. Or my friend Big Charlie, one of the first black skinheads in the New York hardcore scene—he was killed by a garbage truck that ran a red light. And Raybeez, of course—one of the founders of the New York hardcore scene and the singer of Warzone. I met him in 1980. So, you know, I think it’s not only important to remember where you’ve been but who you’ve lost along the way.

That’s a pretty serious topic—especially for a dude who wrote a song called “Douche Crew.”
You know, the sarcasm runs pretty deep in this record, but I’m no longer trying to make people laugh. This record is almost a self-narrative, a critique of myself. And you know, I’m a patriot—I love America. I know this is the greatest country in the world. I don’t agree with everything that George Bush does, but I’m not one of these fuckin’ fanatical liberal mental cases who go around burning SUVs because they eat gas. In the same breath, I know that I’m fucked as a musician with conservative values working in a liberal industry. So I’ll never win, I’ll never be accepted. And the truth is that I don’t care anymore. But they can’t give this record a bad review, because it’s a good record. If they do, they’re obviously a dick.