Obviously this man needs no introduction, even if you weren't there originally when the punk and metal undergrounds were merged together around the time S.O.D.'s "Speak English Or Die" came out. At that point, both sanctions were at war with one another. Crossover taught punkers and metalheads to cut their bullshit and unite with the common bond of being dregs of society, hence the creation of one of S.O.D.'s few serious songs "United Forces." Unfortunately the lessons we learned in the eightes have been squandered in today's punk and metal resurgence. If you weren't there originally, then history is doomed to repeat itself, as they say...

Billy Milano has never been afraid to speak his mind, which accounts in large portion for his legend, but at this point in his career, Milano seeks to purge some of the anger and vehemence that's fueled his infamous tongue lashing. With a final S.O.D. altar offering, the "Rise of the Infidels" EP and a forthcoming M.O.D. album "Red, White and Screwed" that is the definitive mark of Milano's hardcore background, the former New York stomper has taken up residence in Austin, Texas where he looks forward to a more harmonious existence and future music projects that do not include S.O.D.
I had a lengthy discussion with Milano about his state of mind these days, and I urge you to check out the main portion of this interview in my column "Death From Below" in the October/November issue of AMP magazine for more of Milano's colorful comments about life in S.O.D. and the story behind the live show at The Phoenix in Seattle, Washington that is captured on "Rise of the Infidels". Not to be missed, I assure you...

The Metal Minute: Here it is 2007 and Megaforce is back, and so is S.O.D. hypothetically with the "Rise of the Infidels" EP. That label was one of the coolest of the day before they eventually folded the first time. I want to get some of your memories of the early days with Megaforce, "Speak English Or Die" and "Ram it Up" from "Songs From the Megavault". In your mind, what was so cool about Megaforce that you went with them again for "Rise of the Infidels"?

Billy Milano: Megaforce Records back in the day was really unique in a way that the bands themselves that were going to the label grew up in the music scene and represented it at that time. It’s not like music today; you have factory bands, is what I like to call them. What you have today are bands put together for the label by producers. It’s just not really a situation that has any grass-roots movement in it. It’s actually built to be successful and there’s nothing wrong with that; success is a wonderful thing. In the reality of it, however, in the early days of Megaforce, it was something that everyone who was involved with it or everyone who wound up signing to it at that point wound up being affiliated with the music scene for many years. I was part of the New York hardcore scene; the first show I ever went to was in 1980. Back in the day, Megaforce was just starting in ’82, I believe, and I was already a part of the New York hardcore scene for a long time before they got to a point where they were signing that kind of stuff. Once they did, it was like someone representing the music scene, and that’s what Megaforce really was. Megaforce was a label where you’d get signed and they were really a part of it before they signed acts. I mean, Testament, Overkill, Anthrax, S.O.D., M.O.D., there were a lot of bands, even bands you may not have known like Blessed Death, smaller bands that were a part of the music scene. You had Raven, Metallica...there was something about it back then that was functioning under the premise of integrity and belonging.

MM: What exactly happened with (1999's) "Bigger Than the Devil"? I know Nuclear Blast released it, but not much has been made of it and only the real hardcore fans have it. Was it really properly promoted, or what?

BM: Well, the S.O.D. reunion first of all was the bane of my years. It really culminated as a bad experience into a terrible experience. As much as I had fun touring, I never really got along with Charlie Benante. Me and Scott (Ian) are just amicable at best. Nuclear Blast was not a very good record label. Actually, I should say that in Europe they do a very good job! They’re a German-based label and they promote very well in Germany and their other markets out there, but in America, they’re not too focused, not really intent on making things happen. They’re not really worried about the American market; the American market to them is a third-rate market, not a first-rate market, whereas the record label that did all of their distribution in America, Century Media, they have an understanding of the American market because they’re not only selling records here but they work this market. Nuclear Blast didn’t, and consequently they didn’t feel they did anything wrong, and they certainly did nothing period. There was virtually no promo for "Bigger Than the Devil" by S.O.D. or "The Rebel You Love to Hate" by M.O.D., and it really culminated into a full-blown war with me. The difference between me being your nemesis and let’s say, one of these hardcore bands talking about the streets being your nemesis, then more than likely I’m going to come through your office and punch you in the fucking mouth! So you don’t wanna fuck with me, especially when I’m right! I’ll defer blame if I’m wrong; I’ll accept some of it, but not all of it. If I’m right and you’re fucking screwing me over telling me one thing and I find out another thing, it’s going to be fucking war! That’s what happened with Nuclear Blast. 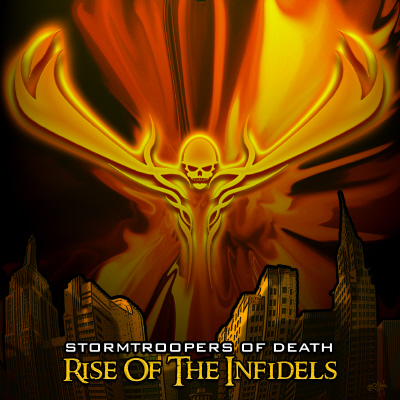 MM: Obviously S.O.D. is bigger than itself as far as the time and place when it came around during the crossover phase in the mid eighties. In fact, I think it instigated crossover, which has already been discussed a thousand times, but I think the key element to the demand for "Rise of the Infidels" is that it's there for fans--old and new--to try and experience that moment.

BM: Well, all I can tell you is this: S.O.D. gets a lot of credit for a lot of things and it deserves it, but sometimes things are better off left a mystery. I think S.O.D. has done what it’s done. This package that was put together by me is simply for the fans. It’s not too elaborate; there’s no cashing in on this. It’s probably going to sell enough to pay for what it cost to make it and that’s more than enough at that point, because I was able to give the fans one last thing of value before putting this behind me officially. This is it. The bottom line is we were able to offer something to the fans that made sense without trying to milk anything. The hardcore fans of S.O.D. will buy this, which is probably a small minority of people as far as the music industry is concerned at this point, but that’s okay, because the people who buy this are going to genuinely want this to fill out the mandatory S.O.D. recordings in their minds. So with that in mind, it’s done and I’m glad we were able to end it this way.

MM: Do you foresee ever being able to just stand in the same room with all four S.O.D. members together?

BM: No. I honestly feel like I’ve outgrown them spiritually and emotionally. I really don’t need to do this anymore with them and I’m happy that I was able to bring it this far so that I can bring it to the point where I can say I don’t need to do it or I’d rather not do it, or more importantly, I’m happy that it’s over. I think I’m able to say, without a doubt, that I’m really happy that it’s done. It’s a part of my life that was a huge influence and it dictated not just my success or my entrance into this industry, but dictated what I wanted to accomplish with my life in music. I know I’m going to do more, I have a new M.O.D. album coming out ("Red, White and Screwed"), I’m going to be producing and I’m producing lots of local bands in Austin as well as giving some advice. I’m possibly going to be representing the roller derby in Texas and doing this new band with Scott Sergeant where I’m the bass player and I’m no longer the singer. There’s a lot I want to accomplish and S.O.D. helped facilitate that and I’m really happy for every point in my experiences in S.O.D.--good and bad. I can honestly say at this point I’m just happy that I was there and that it’s over. At that point, I move on.

Getting to play bass again is getting back to your roots, man...

BM: Well, this was my theory when I moved down to Austin. I want to play bass again because that’s where I started, and I honestly want to finish my career playing bass. I know M.O.D. is viable; I get offers for touring all the time and I know the new record is awesome because everyone keeps telling me it is, but there’s something to be said about going back to where you started. I don’t want to go bounce at CBGB’s again, even though it’s closed; I don’t want to go that far back! I’m not trying to prove anything at this point. I’ve proved everything I want to prove. Now I just want to have fun, I want to do music, I want to express myself musically, I want to help as many bands and people as I can, because not only do I work in the music industry, I work in the club industry as well. I’m mixing and promoting at a club that I have a vested interest in that’s called Headhunters, and I’m content with how I’m going to approach the rest of my music. I want to be happy; I’ve got two great dogs, I live in a great town, I have good friends, the music scene down here is great and I’m an hour from San Antonio, three hours from Dallas, two-and-a-half hours from Houston. I can go anywhere I want in Texas to see shows, I love swimming in the Colorado River; what the fuck else do you want out of life? I’m the happiest I’ve been.