Fans of '80s thrash -- and any metal fans that have been around for a while -- will recognize the name and face of Dan Lilker. Whether tackling ideas like nuclear war and environmental despoliation in Nuclear Assault, giving the middle finger to the world through the caustic strains of S.O.D., or stretching the frontiers of grindcore with Brutal Truth, the thin, satirically-minded bassist has seen a lot of metal history. With Nuclear Assault apparently reunited -- at least on a limited basis -- Dan is back doing what he does best. I managed to catch up with him via e-mail, and here's what he had to say. 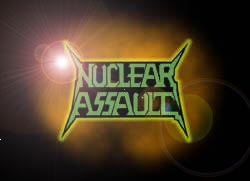 Well, it seems the big news these days is the Nuclear Assault reunion, so let's just go ahead and start off with that. Could you tell us what's going on with that, why you have decided to reunite, and possibly what the future holds for Nuclear Assault?
Well, it's been 10 years since I left, so it seemed like fun to do a few local shows. That will be it besides an appearance at Wacken Open Air in Germany in August. We all have full-time jobs now, so more shows are impossible, unfortunately.

This is not your first reunion type of situation -- in the last few years S.O.D. has also returned with a new album and tour. Did your recent experience with S.O.D. influence your decision to work with Nuclear Assault again?
No, not really, both bands have different dynamics and reasons.

I have to ask -- what is happening with S.O.D. these days? Are there plans for further releases or shows with them?
At this point there are no plans for future S.O.D. activity, but I think that's for the best - the more we do, the less special it becomes.

You've been active in the metal scene for many years and much of your history goes back to the 80s thrash days. I'm always interested in the insights of people who have been around a while about today's scene and how it's changed. Where do you think metal is today, and what do you think its condition is today compared to when you first got into the business years ago?
I think things are quite different now, and I don't like nu-metal at all. In the old days, it just seemed like more fun. Maybe I'm just getting old! Too many categories these days.

What are your favorite memories from the days of each of your band associations -- Nuclear Assault, S.O.D., Brutal Truth, etc.? What will you take with you from each of those bands that's personally meaningful to you?
Nuclear Assault -- this is the band I first toured extensively with, going to Europe and Japan for the first time, so I always remember that.
S.O.D.- I'll always remember people flipping out at the shows and how much fun the shows were.
Brutal Truth -- My memories of this band will always be blurred due to all the weed we smoked, hehe! Seriously, it was great fun to play incredibly intense music and watch people's jaws drop at our speed.

Do you have a style or methodology about how you come up with material? I'm interested in sort of the creative process, as everybody has a different way of coming up with ideas. How does it work with you? Has your "process" differed materially between the various bands you've worked with or has it stayed constant?
Well, personally, good riffs come to me when I'm just walking down the street. If I still remember them later, then they passed the test and I use them. With different bands, it just depends on the songwriting style of the other members, but generally, I just say, "Hey, check this riff out."

Could you tell us a little bit about the end of Brutal Truth and how it came to be that the band isn't around anymore?
All I will say is that when people aren't getting along anymore, it poisons the atmosphere. Since no one was replaceable, we decided to call it a day, that's all.

A great deal of your material is satirical and socially relevant -- you've tackled the environment, nuclear war, racism, etc. Why do you think metal is such a good medium to deal with those kind of issues?
I suppose it's because a lot of kids are quite impressionable at the age they're at, so you might as well give them something to think about if they're going to look up to you.

Indulge me here -- I'm going to name five different subjects, some of which may mean something to you, others may not, but if you have thoughts on any of them please tell me what you think about them.

B) The current international situation, i.e., the war on terrorism.
A big fucking mess. It's incredible what people will do in the name of their god. Unfortunately, most of these extremists should be wiped out for the general safety of the world.

C) The future of thrash metal.
It would be rather strange, I think, because thrash metal pretty much died out in the early 90's. Stuff like that coming out now just strikes me as derivative.

E) The last movie you saw and liked, and why.
The Lord Of The Rings, 'cos it was fucking metal!

We have a lot of readers who are just getting into real metal or who haven't been into it very long and who don't yet know all the history behind it. What would you say to those people about your bands, your work and your place in the "universe" of metal?
I did what I wanted to do at every stage of my career, which includes whatever else I still do. I guess I'd like to be remembered as such, as someone who functioned independently of whatever the current trend was.