A new exclusive interview with Billy Milano
"I have always given my heart and soul to my fans"
October 2005 - Interview by Sjouke Bakker for www.sod-mod.com 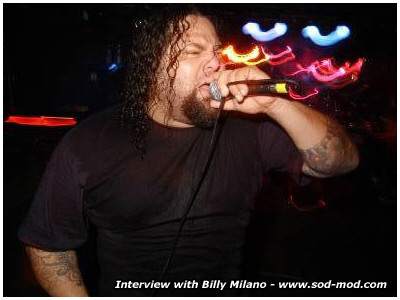 Hello Billy. It has been a long while since the last time we talked and a lot has happened since then. Let's talk about what has happened over the last few months and your plans for the near future. First off, how are you?

BM: I'm doing well, I just came home from a full US tour recently that went well.
Just glad to be home as I feel through my options.

I heard that you and your dogs, Buster and Emma Lee, live in New Jersey again, so you missed the last 2 hurricanes in Texas. Can you tell us why you're back living in New Jersey and are you planning to go back to Texas?

BM: Well, I moved back to the NY area for several reasons. Job opportunities as well as family and friends. I loved Austin Texas more than any place I have ever lived before, but work was scarce and I would rather not rely on touring for income. I love playing music and God knows I have seen plenty of shows both good and bad. I just think at this point in my musical career I would rather tour when the opportunity makes sense both monetarily and spiritually.

You just mentioned the full U.S. tour that M.O.D. did. You toured with Crisis and Jacknife. How was the tour for you personally?

BM: The tour was great. We did a great set of M.O.D. and S.O.D. songs that real fans appreciated. It was 5 weeks of driving and playing. I was lucky that my dogs Buster and Emma lee were on the road with me. They had their own passes and were the main reason I kept my head together on the road. I think I gave it all I had and then I drove at least 8 to 12 hours after every show. It really was a test of my will and I won. I also think it is the last tour I will do. I just don't see me on the road anymore.

So, there's no chance that you will come to Europe and do a tour like this someday?

BM: Because I refuse to fly after those Fascist Islamic pigs attacked the world trade center in NY on September 11th, it is almost certain that I will never be in Europe again. I will truly miss The fans, The Food, The Cuban Cigars, The Hookers and more importantly the wonderful mix of beautiful cultures that encompass and represent Europe and it's infinitely wonderful continent. 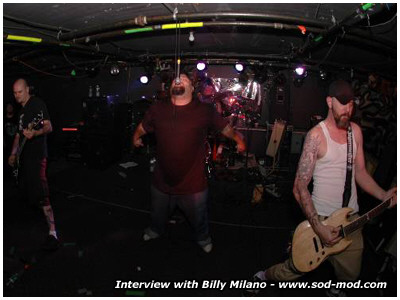 During the recent 'Killith Fair' tour there were all of a sudden 2 new musicians in M.O.D. Who were they and what happened with Danny Burkhardt (drums) and Jon Aaron (guitar)?

BM: Houston Richardsen on bass was a friend of mine from Austin. He plays guitar in a band called BREWTALITY and was on tour for the pure experience. Mike Bennett from 40 Grit played drums for the tour and was a perfect addition. Danny Burkhardt was a studio musician who did some shows live with M.O.D.. I would have loved for him to do it but he had previous engagements and was unable to do it. Jon Aaron was basically too immature to go on the road with me and Scott Sargeant and when it came down to it he wasn't missed.

Are Houston and Mike going to play on the new M.O.D. album as well, or were they only hired for the tour?

BM: M.O.D. I fear may never record again. I have no plans other than to write music when I am inspired to do it. I busted my ass on the last record only to have a bunch of Commie cunts at a record label called Nuclear Blast to do nothing for promotion or tour visibility.

But I heard that you are already writing songs for a new album....

BM: I am writing music. I have no idea or plan for what, maybe it's only because I have no other outlet to be creative. I am comfortable, have a girlfriend and 2 great dogs. I am spending time with my family and my mother who turns 80 this year. I am rediscovering family and that's where I am at right now.

Something else... Just recently I finally saw the videoclip for 'True Colors' for the very first time. A very funny clip! M.O.D. did clips for a couple of their songs, the last one was for 'Wigga'. What is your view on doing video's for a song and the influence of music channels?

BM: I wrote a song called 'Empty Visions' on Dictated Aggression. Done it, been there.

What about an M.O.D. DVD? Nowadays almost every band releases one or more DVD's, isn't it time for an M.O.D. DVD? Did you shoot footage for a DVD on the last tour for example?

BM: No M.O.D. dvd. There is no reason. M.O.D. belongs to the fans that took the time to see it live. END OF STORY.

But wouldn't it be a good idea to release all your videoclips together with some live footage on a DVD? I am sure a lot of fans would love to see those videos.

BM: I would rather see the fans find them for free on your website. Wouldn't you? 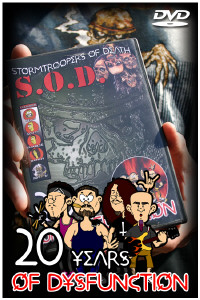 I agree. I already uploaded 'Devolution' for visitors of my website, I will probably upload other clips in the future. Since we're on the subject of DVD's, the S.O.D. DVD '20 Years Of Dysfunction' is available for almost 5 months now in the U.S. I've watched it a couple of times and I still enjoy it. It's a great document, with really nice footage. But why are there no songs of the 2nd studioalbum on it?

BM: It was more about what the traditional band S.O.D. represented. I don't think Nuclear Blast did anything to help S.O.D., in fact I think that they were the worst thing ever to happen to me S.O.D., M.O.D. and my career. A bunch of fucking German metal pussies that fucked me over because I support GEORGE W. BUSH the greatest American President since F.D.R. Maybe we should have bombed Germany instead of Iraq after all the terrorist that attacked America on 9-11 were from a mosque in Hamburg.

Are you satisfied about '20 Years Of Dysfunction'? Which part do you like most?

BM: I have always given my heart and soul to my fans. That alone is satisfaction enough.

Do you know when or if Megaforce plans to release the DVD soon in the rest of the world?

BM: According to Megaforce the release date will be November 28.

The celebration of S.O.D.'s 20th anniversary is divided into 3 parts, right? First the debut CD was re-released (the 20th Anniversary Edition was released in Europe only), a little later the DVD came out, so now it's time for part 3; the final live CD of S.O.D. Is this CD finished already? Of course, I know the livetracks are recorded a few years ago, but how far are you with selecting the tracks for this CD? And when will this final concert be available for the fans? Is there going to be some special stuff on this CD as well? 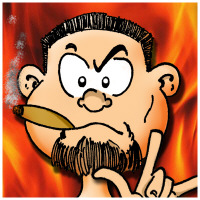 BM: This last installment of S.O.D. ('Live at the FENIX') is being put together for a June release. It is going to be a special final offering from S.O.D. to the fans. Just to say thanks and goodbye. After all it was their band. We just played the parts.

There is not much happening on the new official S. O. D. website. Why is that? It has been launched in the end of May and the content is still the same.

BM: Basically it's just a place for fans to go to understand what the band was about.
The site is merely an archive.

BM: I have some music written by ME and Scott Sargeant formerly of SKINLAB and we are talking to several drummers and possibly doing a demo. No idea where it might go. I just want to see if I can find some fire with a new sound. But you never know.

When can we expect to hear some music from this band?

What kind of music do you currently listen to? Mostly older bands or are there newer bands as well that you enjoy? 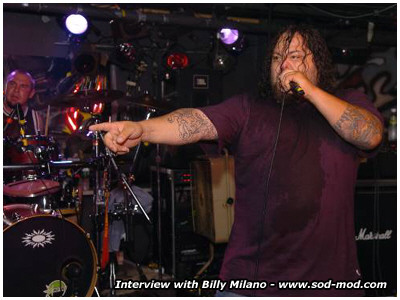 BM: I listen to every style of music. From Louis Armstrong to Lamb of God. I love music as much as life itself. BUT I HATE FUCKIN RAP!!!!

What is the highlight of your career as far as you are concerned? Why is that?

BM: My Highlight is simple. The greatest rock promoter in History (Bill Graham) walked up to me when I just finished my set with M.O.D. opening for EXODUS in 1987 at the Warfield memorial in SAN FRANSICO and shook my hand and said to my face: "That was Entertainment". What else is there. To this day I can still see his sincerity and I was truly honored by this great man.

I'm looking forward to the release of the final S.O.D. album and material of your new band, whatever it will be called. Thanks for this interview!

BM: My pleasure my friend and to everyone who reads this have a safe and happy holiday season. 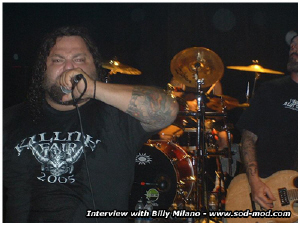 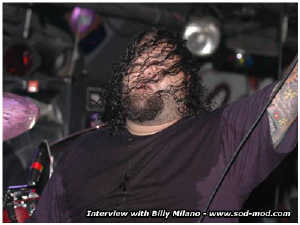