J.A.:  I’m Joe, I play guitar for Method of Destruction, I Hail from a borough in the New York area that is known as Brooklyn. I’ve been playing guitar since I was about 13 but not seriously until I was about 15. My very first band I was in was with a couple of friends from the neighborhood. We played covers, shit like Venom, Motörhead, Slayer. We were the kings of the bar cord, then again isn’t every 15 year old metalhead (ha,ha). But we never got out of playing in my uncles abandon house. My first real band was Maximum Penalty; I was about 17 at the time. Full blown NYHC about 1986-87.

J.A.: I worked odd jobs (driving trucks, construction, etc.) and toured with Maximum Penalty right up until I joined up with Billy and M.O.D.

J.A.: M.P. was putting out records and touring for the better half of the 90’s, playing quite a few shows in N.Y., one of them being the Agnostic Front reunion show at a club called the Wetlands. Roger had asked us to play the show and at the time Billy was working with Agnostic Front. That’s when we met Billy. Soon after the show A.F. brought us over to Europe with them for a tour, Billy was road managing the tour and we just hit it off. We had a really good tour and we developed a good working relationship, so he started to work with Maximum Penalty. After the S.O.D. release and Maximum Penalty at that point, both bands had run there course, Billy gave me a call and asked me to do M.O.D.

J.A.: Well, there’s Billy who you all know, then myself and then we have Scott Sargeant (ex-SkinLab, ex-Laaz Rockit) on bass - great guy, great guitar player - and then we have Danny Burkhardt on drums, funny
motherfucker - great drummer.

From left to right: Joe, Billy, Scott and Danny

J.A.: Well for the most part Billy had most of the ideas already done, but I think when me and Danny (drums) came into the picture we materialized Billy’s vision. What you hear on the record is me, Danny and Billy. Most of the material is Billy’s, all the extra guitar was laid on as we went.

J.A.: That’s a tough one, there are actually 2 tracks on the record that are my favorites, one being "Makin’ friends is fun". It has this old Fear vibe about it - rude & true. The other being "De men of stein" simply because the lyrics are fuckin hysterical and the music has a huge set of balls hanging off it.

J.A.: We were pressed for time to get the record to Nuclear Blast and it was the last song we were working on in the studio. We didn’t want to rush the song so we held it back from going on the record. At one time we thought it was ready but we felt it could have been better, and we were right. We are reworking the song right now, I’m not sure but I think it's going to be released as a B-side later this year…..some shit like that. 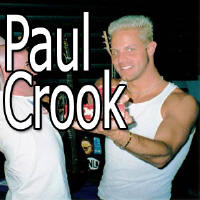 J.A.: Working with Paul was a blast, great guy - killer guitar player. Working with a person like Paul was not only a lot of fun but a huge learning experience for me. To be inspired and pushed to play to the best of your ability is always a good thing. Really cool guy to work with. Big Kiss fan.

J.A.: No, not at all. Paul and me pretty much went punch for punch with the guitar augments. At the time we were just building the record together on guitar in terms of amp choice, tone & ear candy. Although I’ve never been one to share guitar duties in bands, this situation was totally cool and I’ll tell you why, objectively 2 heads are better than one. Paul would have a totally different perspective on a given part then I would, just as I would have a different perspective than he would on others. Listening back to the takes as we went along we realized that the two textures made the overall sound of the record that much better and at the end of the day I was cool with that.

J.A.: This will be my first Milwaukee metal fest so I really don’t know what to expect, I have a lot of friends that have played the fest in the past like S.O.D., Merauder, Skinlab. From what I’m being told it is a full on death & black metal flea market…That’s cool if that’s your thing but I think M.O.D. is going to break up that monotony a little bit this year. Just for the fact that were going to do things a little different than say your average metal band would. We got our shit together I personally think this time around M.O.D. will be a lot more entertaining and a lot heavier . There will be some new songs in the set and there will be a couple of older songs in there as well. We are definitely holding back on a lot of the ideas we want to bring out live, but only for this show. We have an east coast headlining tour of the States kicking of in September, that’s when people will be able to see the full show - ya’ know (make up, pyro, explosions), who knows maybe M.O.D. will burn down a couple of clubs - just kiddin, we don’t wear make-up.

J.A.: The "Assault and Pepper Tour", that was a lot of fun. We had Kevin and Sparky from Dying Fetus in the band for that one. What could I say, the bands we were out with were great (N.S.A. & Superjak), good time, but got cut short a month into the tour when we tried to get in to Canada. They took one look at us and said "No fuckin way". That started a couple of problems that were out of our control with promoters and venues. But we are going to make good on those dates in September.

J.A.: We are going to tour for this record without a doubt, it's also going to be very different than the 2001 tour in many ways. First of the new record is out so there’s a whole chunk of new shit we’ll be ripping through along with the classics, anyone who thinks that this is just an old bunch of hacks playing the same old songs and the same old shit is in for what this band does best and that is a show that will leave you feeling kicked in the head. Yes, we will also being heading to Europe by the end of the year hopefully sooner than later. We are talking to a couple of bands and booking agents right now to get over to Europe as soon as possible.

J.A.: I just picked up a couple of CD’s, I picked up the "Shadows Fall" record (not bad), "Dew-Sented" record (not bad)... I replaced my old copy of Carcass’s - (“Wake up and smell the carcass”) - it was stolen at one of my house parties by some sneaky scumbag - it's older but killer.

J.A.: I honestly don’t really listen to a lot of newer shit, nothing is really blowing me away lately. So I tend to listen to older shit like Bad Brains, Black Sabbath, Thin Lizzy, Bad Religion, Slayer, Carnivore, the list goes on.

J.A.: I would never close myself to any type or genre of music, even though I choose to play certain types of music I could never stick to one.

J.A.: It would have to be a combination of two people one being Dr. Know (Bad Brains) and my Uncle Darraugh Dolan. These two people are responsible for every ounce of inspiration I have. My uncle got me started on guitar, when I was young he played bass in bands, when I was 10 he turned me on to a lot of music at a young age. Once I was up and playing in bands myself it was Dr. Know that inspired style and attack for me. 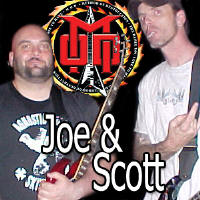 J.A.: I think despite what other peoples view of the band may be,  this record turned out better than we expected so with that being said it's hard for me to see this being the last M.O.D. record. We’re having too much fun doing this band right now.

J.A.: I think I ran my mouth enough, to anyone reading this interview pick up the new record it's everything that is M.O.D. you will not be disappointed - funny, brutal and to the point. Keep an eye out for upcoming European dates.