Rob Moschetti recently rejoined M.O.D.! That's awesome news! I did a short interview with Rob in which he explains when and why he was asked to become the 'new' bassplayer and what future plans for M.O.D. are...

Rob, great to have you back in M.O.D.! When and how did this happen?
ROB: Thanks for the kind welcome home. This just happened around January 10th. Billy and l have kept in touch and remained friends over the years. When talks of getting out to play the classics came up, he just asked if l would be interested in returning to M.O.D. I figured that l needed to get back to where it all began for me. 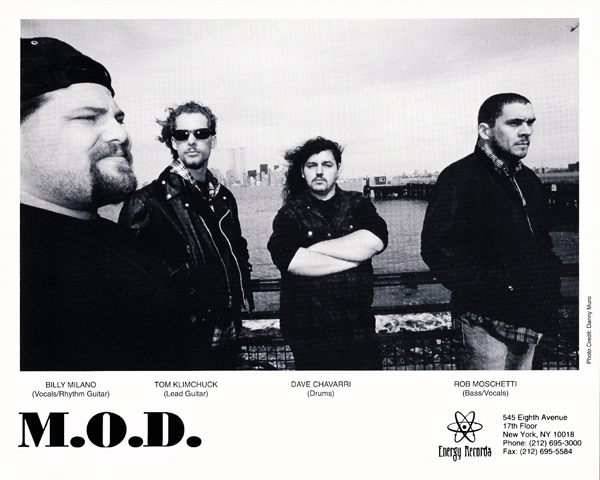 You were in M.O.D. before and recorded and wrote the 1994 album ‘DEVOLUTION’, together with Billy. How long were you in M.O.D. and how much touring did you do back then?
ROB: I joined in 1992, immediately after the 'Rhythm Of Fear' album was recorded. We toured Europe in summer of '93. When the tour ended, Billy and myself wrote the D evolution album, and then toured Europe and America in 1994. I left the band in late '95.

We did an interview about 13 (!) years ago already. You were not in M.O.D. anymore at that time, but you were doing a solo-project. What did you do since then, musically?
ROB: My solo work has been more of a passion project more than a business venture. Unfortunately 95% of the musicians l used were not professionals. I wrote and released a couple of albums but even I understood and accepted that my most successful work was with Method Of Destruction and Pro-Pain. The one high point of my time after those bands was working with legendary Rap icon DMC of Run DMC. 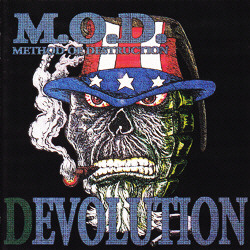 And now you’re in M.O.D. again! How does that feel?
ROB: It feels great to be back amongst a bunch of professionals. Every member carries their own weight without lame excuses. I struggled for 20 years trying to bring rookies to a pro level, but there's a reason why people succeed in music and life and others don't. Excuses and resistance stops growth. How can you evolve if you're not willing to do the work.

In your last band ‘The Pain Method’ you did both main vocals and guitar. What do you prefer? Being a frontman, being a guitarplayer or being a bassist? And does that bandname refer to your past with Pro-Pain and Method Of Destruction?
ROB: The Pain Method absolutely was a play on my 2 prior bands. I love being a frontman. I love singing as well, but l enjoy playing bass and drums. No matter what instrument l'm playing at the time, l give every ounce of my soul. I'm just blessed to be able to express myself, musically in many different ways.

Are you familiar with the M.O.D. albums that were released after ‘Devolution’? Did you for instance listen to the last 2 albums ‘Red, White and Screwed’ (2007) or ‘Busted, Broke & American’ (2017)? In my opinion, they belong to the best material M.O.D. ever did!
ROB: I'm familiar with some of it, but l'm just glad that Billy kept the band going. Those records, as well as every M.O.D. album is what is allowing us to continue 30 plus, years later. 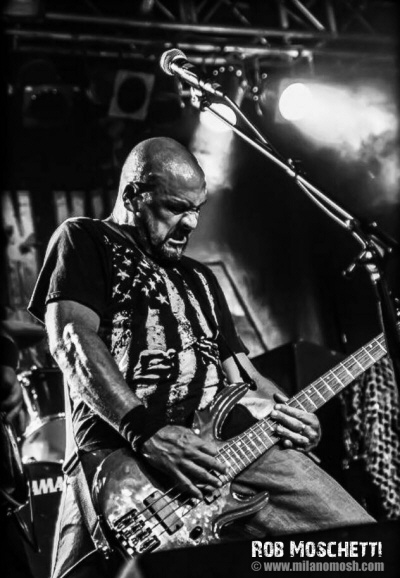 I guess you spoke with Billy about future plans… So what are the future plans for M.O.D.? Where and when are you going to tour? Will there going to be another record? Will you write and/or play bass for it? Tell us everything you know, haha.
ROB: The future is to have fun. Those are Billy's words, and l'm all for it. As far as future albums and touring, l'm sure that a Europe tour is inevitable. The festivals want legendary bands that were pioneers of the genre, and that's exactly what S.O.D. and M.O.D. represent. I will submit song ideas to a future album as well.

Now that you're back, do you think more songs of the album ‘Devolution’ will make the setlist?
ROB: I don't want them to add songs to the set list for my liking. This is all about the fans and the songs they want to hear. I will play every song as if they were mine. If we do some of the songs that I wrote I will deliver them with the same passion as every other song.

Which songs would you really like to play live again?
ROB: I really love playing the S.O.D. songs. I was fortunate enough to tour Europe and play those songs in '93. I was a fan of that album at the same time l discovered Metallica, Anthrax, Slayer, Megadeth and the entire genre from the '80s. I felt like l had been drafted by the Yankees. Of course the entire first M.O.D. album is on that list too.

Did you meet the other guys: Michael Arellano (drums) and Jason French (guitars) already? Michael is very familiar with the M.O.D. material, he toured with M.O.D. in 2013 and 2014 and played the drums on ‘Busted, Broke & American’. Jason is the latest addition to the band and plays with Michael in 2 other bands (Protest and War Ensemble). When will rehearsals start?
ROB: I'm getting to know the other guys now, and we are eager to start rehearsing for some summer shows. Right now l'm re-familiarizing myself with the setlist. I've already played 90% of those songs, but they’re in a dusty file cabinet in my brain. They are all coming back to me pretty quickly.

Thanks for this chat, Rob! Hope to see you on tour soon with M.O.D. and I 'm really looking forward to see you play bass again for M.O.D.!