10 Questions with Billy Milano
Billy talks about the next M.O.D. album, his website and more...
October 2006 - Interview by Sjouke Bakker for www.sod-mod.com

01. Billy, it's nice to talk to you again. How are you doing?
I'm doing great. Lots happening here in Austin Texas. So much that I took my website down so I can launch a new chapter in my life coming January 2007. I think a lot of people are going to be surprised as to how busy I actually am going to be. I would say that I will be more involved in the Industry than ever before. Even more so when I closed down my management and left the studio I was working in to do the S.O.D. reunion, which by the way the drummer Charlie Benante quit the first day. Just thought I would remind everyone.

02. I heard that you have written songs for a new M.O.D. album and that you are starting rehearsals for the new album soon. That's great news! How many songs have you written already and when are you going to record it?
I actually was writing with Tim but I moved back to Texas and as life would have it I moved on, Tim moved on and I felt it was better to just do what I do the way I like to do it and at my own pace. I currently have 13 songs written and 3 bonus songs of covers. It looks like I may record sometime in Dec/Jan depending on what I choose to do. But certainly there wil be an April release.

03. Like you just mentioned, earlier this year you were in New York jamming and writing with Tim McMurtrie. At some point you had about six songs I believe. Then you moved back to Texas. Did you start all over again, writing new songs? Or are there also going to be songs on the album that were written during your sessions with Tim?
There is this one song I wrote in 2005 when I was first in Austin that seems to set the pace for the record. I did rehearse this song with Tim and I will be putting it on the new record. This is the only song that we jammed together, but I composed it. 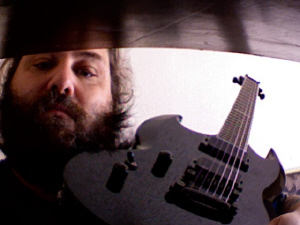 04. Who will be on the record? I heard that there is a possibility that former M.O.D.-bassplayer Rob Moschetti might play bass again for M.O.D.?
First off M.O.D. is going to be whatever I feel it should be. It's not about who is on it, it's more about why they are on it. Rob will definately be involved in the bass department. He played bass on 'Devolution' and did a great job. He will bring an element to these songs that I want and that will compliment the music. I of course have been playing bass for 20 years plus and may play some bass. I mostly will handle rhythm guitars again with some other guitars performed by Scott Sargeant. There may be a guest or 2 on the record for guitars. My high school friend who posts on my message board under 'SCHENKADERE' is an awesome guitarist and I would love to share this experience with him.

05. Right now I am listening to an instrumental version of a song called 'Jose Can You See'. Thanks for giving me the opportunity to listen to one of the new songs already. It sounds like an old school M.O.D. song to me. I like it. What is this song about and what can you tell me about the rest of the songs?
Well, True to my punk hardcore roots I am an Anarchist by nature but still have conservative values. What a combo huh? The song 'JOSE CAN YOU SEE' is my take on the immigration dilemma we are having in America with illegal Mexicans invading our land. I know Europe has a similar problem but I choose to write music about it rather than blog. These new songs are true to M.O.D.; Heavy/Groove/Punk/Hardcore/Metal. Everything that is missing on music today. I listened to the new Hatebreed record and it sounded like old Madball ripping off even older Biohazard while copying new Agnostic Front. I have no idea who is who anymore. These new singers sound like Cookiemonsters-Terradacktales and fucking crybabies whining about how hard it is to keep it real on the hard streets of the suburbs. There is nothing impressive about 170 pound kids singing about the brutal reality of living in a middle class neighborhood and defending his turf, I mean mall.
Honestly, I am not impressed.

06. Do you have a label already to release the new M.O.D. album?
I have several deals on the table. All I can say is I am very busy with multiple projects. We will see which one I decide to take later as things develope.

07. Do you have plans to tour for this new album? I've never seen M.O.D. perform live. What are the chances of M.O.D. coming to Europe?
I hate touring - I hate flying. Most of all, I hate flying to tour. Hahaha. Who knows, if I actually do all the shit I am planning, I am absolutly going to tour and yes, even in Europe. 08. You're busy with M.O.D. at the moment. Are there other things that you are doing besides M.O.D.?
You will have to wait until January 2007 to find out when www.billymilano.com launches again.

09. I also have one S.O.D. question if you don't mind: when will the live album 'Live At The Fenix' finally be released? And what can we expect of that album?
It will be released this spring. It will finally be the last of S.O.D. To be honest I am happy it's done. I am moving on. M.O.D. may be doing a new record and possibly touring, but M.O.D. is not my main thing. I am moving on from M.O.D. as well. I am only going to have time to do it part time and more importantly have fun with the fans of it.

10. Thanks for doing this mini-interview for my website. Anything that you want to add?
I am just very happy to be where I am at and I will keep everyone posted. Happy Holidays and see you in January.