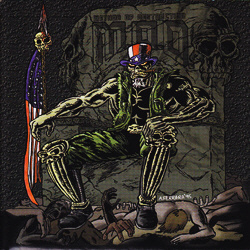 DICTATED AGGRESSION (2:24)
Enter, tanks, from blue skies above. Raining down terror on all that you loved. Majestic hills that roll, under tank treads. Are painted with puddles from the recently dead. Coalitions set up to reign new conditions, new thoughts to train. Mass solution, we must confide. Is mustard gas, with your ass on rye.
Armor divisions, impervious pain.
Religious collusion, new gods ordained.
Mighty contusion, scarring the land.
Dictated aggression, dictated man.
Napalm coktails, served up hot. Claymore showers, soothe your guts. The re-conditioned, show no alarm. We re-conditioned them with our smart bombs.

SILENCE YOUR SIN (3:03)
I choked on a piece of the American Dream. The taste of blood, apple pie. Scars and stripes, was enough to make me scream. I cried as a piece of the rock went south. It crossed the border at half past twelve. Thanks to that dick, in the white house.
Speak with your heart. With your heart you will pay. Think your own thoughts. Your rights are cast away. Fit in the mold, then you get to plant your seed. But...silence your sin. I wipe my tears as I gaze at the red, white and blue. I think of god and of family pride who were sacrificed, for shit like you. It burns, to watch your flag, go in flames. I see the fire burning up, from thunderbird. And people haze.

DAMAGED (2:48)
Get yourself a razor blade. Get yourself a video. Drown your thoughts with J.B. Masquerade your misery. No need to hide your attitude. No ones here to listen. Scrambled thoughts, now scrambled eggs. Your nostrils caked and gustened. Floating in your cosmic sewer of love, peace and horse manure. You decide to hitch a ride with
Captain Kaos on pesticide. Fill your head with empty thoughts of mistletoe and sugar plum demons. Stoke the furnance, the flame glows brighter. Laughing as your face grows whiter. No need to hide your solitude. When no one ever listens. Building your own arsenal of hatred and misgivings. You're fucking damaged.

SHOT GLASS (3:27)
I greet the day with anger, bombs and verbal threats. I lift my head, in dread, of things not yet. Lets have a drink, then throw up in the fucking sink. Shot glass...shot glass. If you're in sight, there's gonna be a fight. Shot glass...shot glass. It's me and you and shots enough for two. I drink the drink, I drink, until I drink again. I see the day, my eyes are glazed and pinned.

STAND OR FALL (3:29)
I read the writing on the shit house walls. The lines are drawn, we must stand or fall. We the people, polarized, can't even think to sympatize. If there's no justice, there's no peace. We must unite to get aside. The woe and grief, a final stride. Must confide. May never come to save our sorry hides. Go read the writings on the wall... Stand or fall. All this talk of race and war. Leaves speechless on the floor. The futures written in the past. Etched in the memories of cynicism's laugh.

HIPPYPOTTOMUS (2:23)
Chubby chick you look hip. When you dress up in tie die. So now what will you do that Jerry's dead. Will you finally wash your hair and join the real world. Or wait for Bob Wier to tour instead. Everybody peace out and look at the cool clouds. Granola parades, make up your weekend. Taking acid, eating your tofu. Wearing sandles, keeps you down to earth. When in reality, it's gravity versus girth. Miss Hippypottomus it's 1996. You gotta work to live. You just can't enjoy the trip... Miss Hippypottomus. I really think that Jerry was ultra cool. But unlike you he's dead now who's the fucking fool.

JUST GOT FIRED (2:23)
Five across the eyes, sweat beads down my brow. I got a feeling and its pretty bad. I'll hide it just for now. Polish up the chrome, polish up my bone. Hanging out with six dumb, dumbs, in my funeral home.
Cross hairs, crossed paths. You die, I laugh. I leave, you bleed. I'm firing you, cause you fired me.
I cash my final check, but you cash in your chips. You look kind of funny begging and crying like a bitch. You should have seen your face, when then the dummies hit. You opened like a ripened, rotten bag of gutless shit. Cause I've just been fired. You die... Just been fired.

WHITEOUT (2:56)
Life is short in the Sgt. 's house of pain. Endless suffering, is holy gain. Bamboo shoots and fingertips. Broken legs and feet will be dismissed. When others fail the Sgt. prevails... Death... Destruction... Whiteout. Swollen eyes, not from tears of joy. Stick to his boots, then make a popping noise. Electric rod jammed down the shaft. Electricute your balls until they blast. When others fall the Sgt. prevails. Death... destruction... whiteout.

BRUTAL BEATS (3:33)
It's the T to the rip. Slick and finger licken good like chicken. Possessed like Linda Blair, in exorcist. Can't front on the dragon, that's ludicrous. Your styles suckin', like a lollipop. Knock, knock who's there. Yo a buck a shot. Da fuckin' black panther. Comin' right at cha. Poisonous... I spread like cancer. Crews fuckin' hate us, I'm mad fuckin' famous. 4 takin' no shit and puttin' boots up your anus. Ruthless...I'm leaving niggas toothless. I be da ill funk freaka blown out you speakers. Hard rhythms, complete. Brutal beats of concrete.
Ruthless. But don't let that trouble you. That's ruthless, spelled with an R and not A W. Mad like Alfred Newman. Bad, like Michael J's new chin. Kickin' science harder then spock. Picken out victims like Furman with a glock. Buck, buck, buck, shots be ringing out. Slam you ass like Hogan in title bout. Hard rhythms, complete. Brutal beats of concrete.