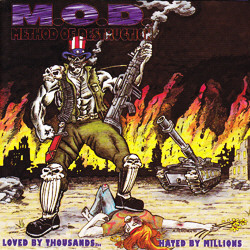 "I still can't believe that after all I've been through, after all the different band members, after all the rumors and allegations, people still enjoy M.O.D. as much as I do. This album, which has songs from all the M.O.D. albums and EP's also features some new tracks. I hope you enjoy listening to it as much as I enjoyed creating it. M.O.D. although sometimes greatly misunderstood, in my eyes was a band for anyone who dared to laugh aloud. It was an ongoing comedy show but it also had a serious side. I always tried to write heavy music with a good groove, but somehow other people who were involved were so worried about everyone else that the ideals of M.O.D. got somehow lost. When I reflect on what I have accomplished with M.O.D., I have nothing but fond memories and a genuine sense of worth. But all things said and done, the real reason I have personally spent my time to do this "Best of" LP is to ensure that the true M.O.D. fan gets a worthwhile album, and the curious who are interested, get a basic idea of what we're all about! No bullshit "Best of" record! All the classics, all the songs that really count. Pieced together by my chubby little fingers and my undying sense of humor - but in the long run I would rather be.... Loved By Thousands than Hated By Millions." 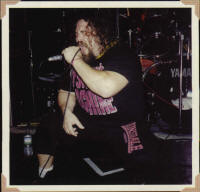 02. Aren't You Hungry (3:26): "This song originally written for the second S.O.D. album, was the model song we wrote around, it had all the required elements. Heavy music, dark lyrics, very satirical attitude. It also used the "N" word and pissed a lot of people off... but sold a lot of records, so did N.W.A."

03. Spandex Enormity (5:27): "Although discounted as my overzealous imagination, she did exist, she was the beast from the east. She was my lazlo."

04. A.I.D.S. (2:00): "If I had known about this being such a terrible disease, I probably would have been more sensitive, but since I didn't, I wasn't. So sue me, life sucks! Then you die. Irregardles, I still think shoving up a live hamster up your ass is the sickest thing I've ever heard, and if you do this you deserve to die."

05. Hate Tank (2:13): "This was originally done for tones on the "Rhythm of Fear" session. We added a new guitar sound and bass tone. The vocals are heavy and it's still a great song. Groovier than Marsha Brady; but it's certainly not the Love Boat."

07. Surfin' U.S.A. (2:32): "Two things I've always maintained, The Beach Boys are my favorite band and Ted Nugent is my biggest influence next to the late, great John Belushi. This was a fun song, exept for the background vox not being in key, and when you're the singer that's bad shit. Maybe I should have spent my money on singing lessons rather than donuts."

09. Mr. Oofus (3:37): "This song is funny and features Laurie Hunter as the victim. It has some heavy groovy elements. The lyrics are a bit silly, but so was this whole EP. At one point M.O.D. was going to record a pep rally EP. But I never went to one..."

10. No Glove No Love (2:51): "The bass player from Tesla gave me this title as an idea for a future M.O.D. tune. If you stick your dick in anything other than your hand, you're begging for trouble. You might as well shower with your toaster. 'BAZZZAPP', you're dead."

12. Livin' In The City (1:58): "FEAR originally wrote this, a great song from an equally great band. 'Fear The Record' is a must for your collection. Background vocals were performed by Flotsam & Jetsam as well as Scott 'Skiing' Ian."

13. Get Up And Dance (2:59): "In the tradition of the old M.O.D., humor as well as maniac riffing of Tim McMurtrie (Rhythm Trip). This was my favorite song to record, Rhythm of Fear was a great record."

14. Rhymestein (2:36): "As far as me rapping, christmas presents are more my style. Tim McMurtrie takes this song to the limit, my choruses aren't bad either. A wicked blend of the ever potent mixture. Heavy riffs, humor, good times."

15. Irresponsible (2:26): "This song touches on a very sensitive issue. The children of this world need time, love and encouragement from everyone. We must fill their hearts and minds with pride and self worth. If I was ever meant to be taken seriously, this is why. They are the future!"

16. Rally [N.Y.C.] (1:40): "This song was written when grunge was booming. The NYC area was down and in desperate need of quality bands and support. But New Yorkers remember, Connecticut, Upstate New York and New Jersey make up the mecca that is New York."

20. Ode To Harry (1:31): "Believe it or not, my brother, affectionlately known as Crumb, wrote these lyrics as a joke. You should have seen his face when he heard it. This song literally changed hatred for an older brother into admiration of a total lunatic."

22. Theme Song (2:09): "With all things collectively said about me, you later realize, I am what I am, you know of me, but not me. I would like to believe there is a greater reason for me. Maybe if I cut some slack, someone in return will do the same; or maybe I'm just a rubberhead who, in his own twisted way, would love to change the world, stop war and poverty, help feed and house those less fortunate, treat people with respect, raise the hope of those who suffer and lighten their paths to salvation... NAH!"

24. Buckshot Blues (0:11): "Suicide must never be taken lightly, I have personally felt its effects. However, only a drugged out moron that is so assbackwards and spineless would kill himself because life is cruel when you have ten million fucking dollars. Kurt Cobain was obviously a drugged out idiot who made as much sense as his lyrics. Fuck him and Seattle - Die! Die! Die!"

25. Clubbin' Seals (1:55): "In the world of politically correct people I must look like Hitler or Stalin. Don't be so fucking sensitive to everything. This is a great song and it's cool."

27. He's Dead Jim (1:50): "Originally recorded by the Functional Idiots of Pi Alpha Nu fame. This song is a trekkies dream, complete with music from the Star Trek fight scenes. You green blooded bastard! - Beam Me Up, Scotty! Incidently, the cover art for USA for MOD, Devolution and Loved By Thousands... were created by Anthony Ferrera, the singer of the Functional Idiots..."

28. Get The Boot (3:13): "Richard Ramirez or the Night Stalker as he was known, was a piece of shit who raped and murdered for Satan. This guy should have been burned alive. Fuck him and Satan!"

© Liner notes by Billy Milano. Taken from the 'Loved By Thousands...' booklet.