I just saw the two DVD's from S.O.D. and they kicked ass.
On the 'Speak English or Live'-DVD is the 'With Full Force' gig of 1997 shown. What really made me proud is not just the fact that I've been at that show, but that I saw myself on the DVD, standing in front with thousands of S.O.D.-hungry German Stormtroopers. 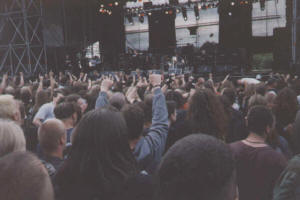 This show was the greatest show I've ever been to. (Forget about Slayer, Metallica...). I took some pics that day. Here are 3 pictures of the 'With Full Force' show in Zwickau, Germany. This was the first time S.O.D. played in Europe.

My cousin Markus and I drove from Heidelberg about 600 kilometers to get to Zwickau, which is in East-Germany. I never thought that I would ever get the chance to see S.O.D. live on stage. S.O.D. entered the stage after Biohazard and the crowd was ready to go crazy.

For everybody who hasn't been there, just watch the 'Speak English Or Live'-DVD and you can feel the power of this show.

The first picture - I would say: Fist Banging Mania. On the second picture you can see Billy sitting on the "Bike of Death" (pretending to be Manowar). The third picture shows Markus (left) and myself after the concert. Look at my face - I can't get the fucking smile off of it!!