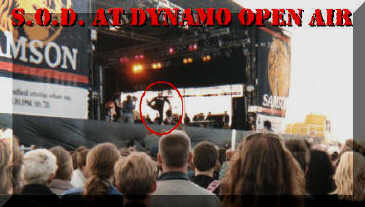 After the release of 'Bigger Than The Devil', S.O.D. went on tour.
They played twice in Holland:

I saw S.O.D. at the 1999 edition of Dynamo Open Air. They played at the main stage on saturday, right before Cradle of Filth and Manowar. So, in my opinion S.O.D. were the true headliners that day. They played in the evening between 19.30 and 20.30.

Because 'Bigger Than The Devil' had just been out for a few days, a lot of people didn't know the new stuff yet. I had the record already, so I thought I knew what to expect... but it was beyond my expectations.
S.O.D. played a set of 'old' and new material. It was great. They even performed 'The Ballad Of Kurt Cobain' (a song that wasn't on the new album). But everybody knew the lyrics: "You're dead".
It was great to see S.O.D. live, it was an experience I will never forget.
I went to Dynamo Open Air to see S.O.D. and Metallica (they played the next day). They are two of my favorite bands, but I liked S.O.D. most.

Bands I saw on saturday, May 22nd:
Nashville Pussy, Grip Inc., The Gathering, S.O.D. (I didn't stay to see Cradle Of Filth & Manowar).

© All pictures Dynamo Open Air 1999 taken with a disposable camera by: S. Bakker.