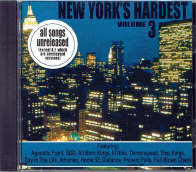 As I mentioned earlier, S.O.D. contributed 2 tracks to New York's Hardest, volume 3 (Go Kart, 2001). I finally got a copy now. There are 12 bands on that album, every bands plays two previously unreleased songs (except Agnostic Front, who contributed  new versions of 'old' songs: 'Blood, Death and Taxes' and 'Shadows').

I was, of course, very curious about the 2 new S.O.D. tracks: 'Java Amigo' (1:12) and 'Pathmark Song' (2:32). And let me tell you, I am not disappointed! The beginning of the first S.O.D. song reminds me a little of the old Mucky Pup, the same kind of groovy music. The rest of the song is fast (like in 'Charlie Don't Cheat'). The second S.O.D. track is full speed ahead. The guitarsound on both tracks is, in my opinion, better than on 'Bigger Than The Devil'. I'm glad I ordered this cd. I wanted it for the S.O.D. tracks, but there are more good bands on this album!

I added this cd also to the S.O.D. albums page: click here.

Speak English Or Live (the DVD) was released in America in September 2001. In Europe it has not been available until February 18, 2002. The DVD features S.O.D. 'Live at Budokan' (The Ritz, 1992) and live in Germany (With Full Force, 1997). Steffen Kohl from Germany was at that second show. He just send me a short review and some pictures, which I published here: 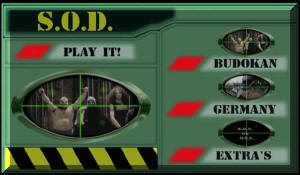 Seasoning The Obese is not only available at 3" inch single-cd, but also as 7" single. Mark Brand from Germany send me scanned images and other info about this items. I've added them to the 'special items' page. Click at the picture below to get there. If there are other fans with special items, just send me an e-mail and I will publish your info.

S.O.D./M.O.D. frontman Billy Milano has asked BLABBERMOUTH.NET to post his personal statement in response to the ANTHRAX Behind The Music special, which premiered on VH1 on March 10th. Milano's statement reads as follows:

“If you aren't aware of who I am, or my screen name Xkrament@aol.com, then allow me to make a brief introduction. I am the frontman/singer of S.O.D./M.O.D. My name is Billy Milano and I am absolutely and utterly disgusted with Scott Ian & Charlie Benante. To not mention Lilker, myself or S.O.D. on their Behind The Music show is not only ridiculous, it is selfish and absurd.

For 2 years now, the S.O.D. web page, put up by Charlie and Scott, was ATTACHED to ANTHRAX's site. Charlie's lame excuse for not having me, Lilker or S.O.D. on VH1 was, we have no relevance to ANTHRAX. THEN WHY THE HELL WAS IT ATTACHED TO YOUR WEBSITE FOR 2 YEARS!!!!!!!!!!!!!!!!!!!!!!! I had it taken down for lack of relevance! Well, I can accept a bitch move like this from Charlie (after all he was raised by women) but from Scott! I can't believe he is trying to sell the whole world that S.O.D. has no relevance. It's obvious they have no ability to give anyone other than themselves credit, after all S.O.D. was and always will be fueled by integrity — unlike ANTHRAX. Just ask Danny Lilker! Founding member and the person who thought up the name ANTHRAX. For Christ's sake, they didn't even mention he played on the record Fistful Of Metal!!!! Dimebag Ian and Charlene Benante got a wake up call coming.

I have been, and always will be, outspoken to the point that people will question my motives. But understand — I have always spoken my mind and will always put my beliefs and opinions ahead of my career and the industry. But in all my life, and I swear on the blood of my family and all I adore, I have never turned my back on a friend! What Scott and Charlie did and said has ripped my heart out. They have made me realize they are not my friends. I won't be friends with anyone who doesn't understand the core fundamentals to the word 'friend'. Loyalty-Honor-Integrity-Faith-Compassion-Understanding… These qualities equal the greater whole! They equal friend. Something they are no longer to me. Much respect to Lilker. Scott and Charlie can kiss my hairy Italian ass! Let the war begin. Operation Milano Mosh!!!!”

Billy Milano decided to take a much needed break from recording his new M.O.D. album: "I don't know when I will finish or when it will be released -- September, maybe." So this means that we will have to wait a few more months for this album...

Billy said this in an interview with Bill Coronel, March 16th. For the complete interview, go to his website:

Former ANTHRAX and current S.O.D. bassist Danny Lilker has asked Blabbermouth to publish the following statement regarding the way his contributions to ANTHRAX's early years were portrayed in the VH1 Behind The Music special on the group, which premiered last weekend:

“I would just like it to be known that I was extremely unhappy with a particular section of ANTHRAX's Behind The Music episode broadcast March 10th. Anyone watching the show would incorrectly assume that I had already departed the band before ANTHRAX recorded the demos that eventually got the band signed to Megaforce Records. One would also be led to believe that I did not participate in the recording of the debut album Fistful Of Metal.

“Now, most older metalheads would know already that this was not the case, but I was still pissed at this gross inaccuracy, hence this statement. At this point, I still am not sure if this was sloppy research on VH1's part, or perhaps band members giving erroneous information to 'simplify' the story. Maybe a little of both. Regardless, I felt moved enough to speak out.

“Anyone who types 'ANTHRAX Fistful Of Metal' into [the] Google [search engine] will find out within about 10 seconds what the real deal was.

“Being part of ANTHRAX during that time frame was a very exciting time in my life, thrash was starting to break and we were on the cusp of the whole movement, along with METALLICA, SLAYER, VENOM, etc., etc., so it was somewhat of a drag to see I'd somehow been written out of that part of the story.”

In related news, ANTHRAX are rumored to have signed a four-album US deal with Sanctuary Records last week. The group will remain on Nuclear Blast Records for the European territory.

Probably one of the worst things that could happen to an Internet company, happened this last week. Bravenet experienced an unauthorized breach into their server network and it was necessary to restrict public access until they could analyze the servers for possible further problems.

They have finished that process and are now turning the site back on, service by service. If you notice a service not yet online, please be patient as the process of re-activating services is very time consuming.

My Bravenet-counter is back now, it starts with the amount of visitors that were here until March 1st, 2002. It should also be possible to use my fast URL again:

Comrades,
It's Billy's masterpiece. This is what he does best. Burning bridges. And who am I, with my little bucket of facts and figures, to try and put out his flaming rhetoric. Let it burn! I created Sgt. D. I founded the Stormtroopers Of Death. They live on. Unlike the infamous doctor in Shelley's story, I didn't create this monster. Billy is Billy. Love him or hate him.
So let it burn.
Scott

PS I didn't know Billy was a genealogist too!
PPS Oh, and for the record, the IRS did not take my house. Look it up.
PPPS - www.stormtroopersofdeath.com R.I.P.

Read the email Metal Sludge just got in from Billy Milano, who is responding to Scott Ian's response to his 20 Questions. Hopefully you can follow that.

When Paul Crook emailed Metal Sludge and said he could get Billy to do 20 Questions with them, they thought they'd find out what the story is and get to the bottom of it.

"This is by far the angriest and one of the most brutal 20 Questions we've ever done in our 3 1/2 years of doing this. It's so angry if you're not paying attention to what Billy's saying a hand will come out of your screen and slap you in the face. So pay attention!"

(I asked Paul Crook if this was just a joke or serious. He replied: "Yes,'it is true.")