And what can you expect within the next few days:

Official Fansite of Europe
First of all I want to thank Billy Milano for making my site the Official Site of Europe. I'm really proud of it. This means that I am on the newspage of www.billymilano.com and that this site will be updated with the latest news, reviews, pics and tourplans. Billy has also something else in mind, but you'll find that out in about 3 or 4 weeks. So keep coming back!

The Rebel You Love To Hate
I got a copy already and I think it rocks! Don't expect an oldtime hardcore album when you are going to buy it, 'cause it isn't. It's just good music. There are some really great songs on it and it sounds great. Not sure yet? Or just curious? Download a couple of songs here (rightclick and 'save target as...'). And if you like them, don't forget to buy the album. Releasedate for Europe: June 2nd, 2003.

Reviews
I just added a new review and an interview, both from www.eSpudd.com. You can also read the interview here. 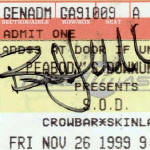 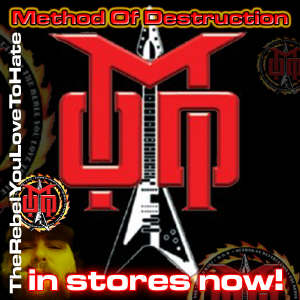 In Europe the album will be released in June. But it is possible to listen to it already!!! Billy told me to upload the following tracks, for fans to download. Enjoy.

Thanks to Billy Milano

PS: If you like the songs: BUY THE ALBUM! 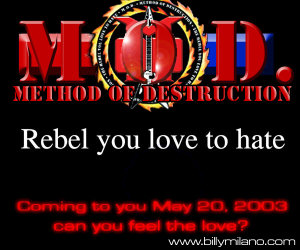 Here are some important (up)dates:

Recently I've added a new page with some reviews of 'The Rebel...'. You can find links to these reviews by clicking at this banner:

Billy about why he cancelled the filming:

"When I realized they were going to run every aspect of the show and play bullshit videos, I cancelled my filming. Out of 400 people 6 got called back. I was the only person who told them to shove the job up their ass if they were gonna play the same bullshit video's. So it's no surprise I didn't get the job. Haha. Below is the response I sent to the director if MTV. I fuckin RULE!!!!!!

Steve,
I read the script and I have to speak my mind. I can't be involved with anything that is going to compromise me. GODSMACK? IRON MAIDEN? METALLICA? You played this shit enough, to put in on more under HEADBANGERS BALL is a bad idea. If you guys ever get serious about HEADBANGERS BALL, then call me and I will save your show from the failure and ridicule it's heading toward. Integrity is not just a word in the lyrics of my music.

VIDEO
Billy is doing a video for the 'Wigga' song. It is a situation video and it will feature an EMINEM look-alike. "I know this will be a very funny video," Billy told me.

REVIEWS
Billy: "I will have some news for you this week - I have been really busy with all these interviews. I am doing them all day. The record has been getting great reviews in Holland and the people in America love this record."

NEW SOCIETY OF ANARCHISTS
New Society Of Anarchists did (among others) some back-up vocals for 'The Rebel You Love To Hate'. Billy Milano sent me this picture earlier. 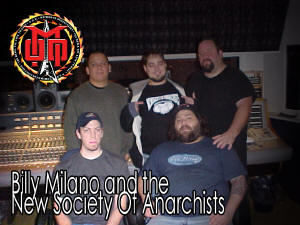 Here's a message I took from the N.S.O.A.-website:
"New Society Of Anarchists has (just) returned from Water Music in Hoboken, New Jersey. N.S.O.A. did the back-up vocal tracks overseen by friend and producer Billy Milano on the brand-new M.O.D. record entitled 'The Rebel You Love To Hate'. N.S.O.A. got to see the NYC area and hang out with Billy Milano (M.O.D./S.O.D.), Bill Wilson (Blackout Records), The Turbo A.C.'s, Paul Crook (Acclaimed guitarist and producer for such bands as M.O.D., Anthrax, etc...), and had an awesome time. Thanks Billy!"