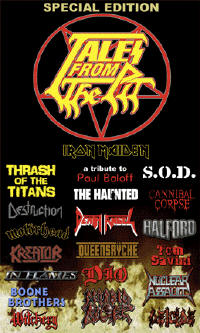 S.O.D. is one of many bands that appear on this issue, which was released September 20th. This edition features almost 3 hours of metal news and entertainment.

For ordering info, go to  :
www.talesfromthepit.com

MOD is touring right now
Yesterday M.O.D. started touring. They played at Toads Place, New Haven. For more tourdates visit www.billymilano.com. If anyone is going to record one of these shows, don't forget to send me a copy! Reviews and pictures are welcome too.

Special items
It's hard to find more recordings of S.O.D.-shows. This week I received a copy of the show S.O.D. did in 1985 at Yonkers, NY, October 18th (Dan Lilkers' birthday). You can find it at the 'special items'-page. I also got a version of Kill Yourself by Impaled Nazarene. They recorded it already in 1996.

I've had a few requests for mp3's. Thank you. Keep sending in requests, because every month you will find a new song to download at this website. This month I've chosen 'Don't Tread On Me'. This song was originally written by the Cro-Mags. S.O.D. played it at the With Full Force festival in Germany and during their short American tour in 1997. This version was recorded live at the Chance, Poughkeepsie, August 1st, 1997. 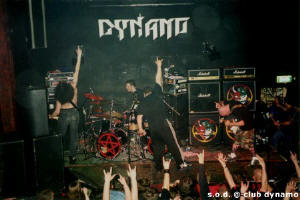 I also received a new - and even better - copy of S.O.D. at the Wâldrock show, also from 1999. You can find both items at the updated special items page.

MP3
Recently I got a lot of e-mails of people asking me if I could send them an mp3. I don't do that. You can say what mp3 you'd like to see at the downloadpage and you can trade shows with me. It's still possible to send me suggestions on which S.O.D.- or M.O.D.-mp3 I should upload in September. Take a look at the special items page and make your choice! 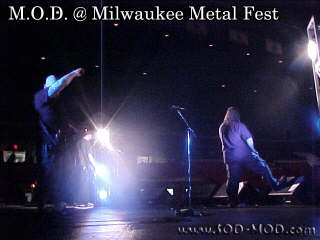 Billy Milano sent me some pictures that I could use at my fansite exclusively. At Billy's site you will find more (other) pictures of the same event. Click here for the pictures at www.sod-mod.com.

Tourdates
The following dates are confirmed. More dates to come.

Video update
In case you wondered if M.O.D. finished shooting the new videoclip for 'Wigga', they are not done yet. M.O.D. are doing some more filming for the video. Then the're gonna edit it. More about this later.

What's new?
The special items page is updated with all the live-recordings I recently got. I receive a lot of e-mails from fans who like to know if and how they can get a copy of one of these cd's. Well, I got most of them by trading with other people who also have S.O.D.- or M.O.D.-shows on cd. If you have an interesting item, we could trade. These items are NOT for sale!

Download
At this location you will be able to download a livetrack from S.O.D. or M.O.D. every month. The track is taken from one of the recordings you can find at the special items page. This time it's S.O.D.'s 'Ballad Of The Midget From Kid Rock', recorded live at CBGB's, December 14th, 2000.

Any suggestions for future downloads are welcome!

M.O.D. at Milwaukee Metal Fest
A few days ago, July 26th, M.O.D. performed at Milwaukee Metal Fest. I am looking for a recording of that show. M.O.D. played songs from their latest album 'The Rebel You Love To Hate', but also 2 older songs: 'Hate Tank' and 'AIDS'. They even did 'Fuck The Middle East' and Dan Lilker (who was there with Nuclear Assault) joined M.O.D. when they were going to play the last song of the set; 'United Forces'. I heard it was a great show.