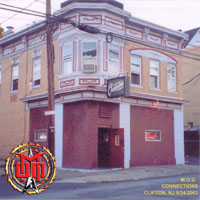 This was the last show with Joe Affe on guitar, who left a couple of weeks ago and is now replaced by Jon Aaron. This recording is one of the best sounding bootlegs I have in my collection! It was recorded and mastered by Jeff Sebastianelli. Great job! He also did the artwork.
M.O.D. played a really nice set:

More info about this item here 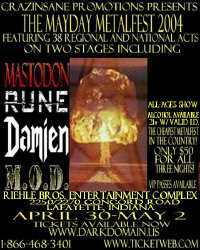 For more info about the MayDay MetalFest 2004, visit:
www.richardthicke.tripod.com/mdmf.html

TOURNEWS
The band will be rehearsing until they leave for Florida. According to new M.O.D.-member Jon Aaron the band started rehearsing already about a week ago. M.O.D had its official first rehearsal on February 23rd!

Jon: "It was absolutely killer. I'm very proud to be playing alongside Scott, Danny, and Billy- very cool guys and great players. Songs we were jammin on were Assghanistan, Making Friends, Wigga, Rebel You Love To Hate, Rally NYC, Aren't You Hungry, A.I.D.S., Hate Tank and there's even talk of playin' some classic S.O.D. tunes. Overall, I must say, you guys are in for a REAL treat. The set and show is gonna KILL!!! Hope to see you out on the road!"

M.O.D will play at the following festivals:

Another J.A. on guitar 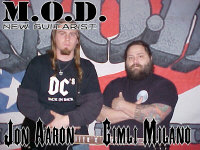 At www.billymilano.com, Billy introduces M.O.D.'s new guitarist Jon Aaron. Jon about joining M.O.D.: "First of all, I am an old school S.O.D./M.O.D. fan and a fan of Billy Milano. Billy's knowledge of the music industry and contacts are an invaluable asset to establish my musical career. Doing a band like M.O.D. is like metal boot camp. Billy Milano is in fact Sgt. 'D.' the drill instructor from hell! This is all about learning the ropes, touring and understanding a professional working band."

When I got this recording from the 'November to Dismember' festival, I immediatly knew what should be the MP3 of February 2004. At first, this show doesn't seem very different from the other bootlegs of the 'Killith Fair' tour that I already had. But what makes this show special is that it was the very first time that S.O.D. performed 'Seasoning The Obese' live! The single hadn't even been released yet. For more info about this show, go to the 'special-items page'.

Click here to go to the 'download-section' and listen to this early live version of Seasoning The Obese.

PS.: The MP3's of December 2003 and January 2004 are no longer available, but the MP3's from August - November are available again.

According to Billy Milano himself, it had something to do with the booking agent. Billy: "Unfortunately I had to postpone the European tour. The booking agent I selected was not doing a good job so I felt it was best to wait. [...] I'll get you further updates soon. Peace Billy."

Hopefully there will be better news next time. I would love to see M.O.D. play this summer at some Europeans festivals. Let's just see what's going to happen.

*EDIT*: Just seconds after I posted this news, I read some more important announcements by Billy concerning M.O.D. at Billy Milano's Messageboard. So, here it is:

Big-big News
"First off, :Let me thank everyone who reads this and actually takes time to enjoy the website. James (the webbastard) and myself take alot of time to make this site happen. Unfortunately, The European tour is gonna have to wait. Not enough support from the label and a bad choice on my part for picking the wrong booking agent.

Next!- Joe Affe friend and guitarist is currently jammin with is old band and both he and I wish each other luck in this shitty industry. I'll keep you posted when Joe gets closer to a deal or gets a demo or some shit.
I will be announcing the new guitarist this weekend and will interview him so you rubberheads can get to know him.

Here's the big one. I am in think tank mode to make the "Killith-Fair" the underground touring package I've always looked to do. It will feature many of the things you have come to recognize with festivals. I spoke to none other than Mr. Jack Koshick and he thinks it's a great idea. So tell me what American Bands on what Label should I talk to???
Thanks for your support again and look for website updates.
peace
Milano".

Shortly after I had taken down the mp3's of December 2003 (2 days ago), I got a few requests already if I could upload them again. So I decided to give people who just discovered this website (or hadn't visited it in a while) a last chance to get this bootleg complete.

Click here if you want to download all 24 tracks of 'Pussywhipped'. Artwork is also available at that same page.

Pussy Whipped
Side B of this bootleg from 1985 will still be available at my website for the rest of this month, but I've just taken the first 11 tracks down. I had those on my site 2 weeks longer to give you an extra chance to get a complete bootleg, but now time has come to remove them. If you want to download the MP3's from January 2004, just click here. There's also artwork available now!

M.O.D. tournews
At www.billymilano.com you'll find dates for 2 upcoming shows in March 2004. Check it out.

Contest
I'll have some news for you soon about a contest on both Billy's website and this S.O.D. & M.O.D. fansite. I can't give you details yet, but I can promise you that you'll have a chance to win something very special.

That's all for now and come back soon for more updates about this contest... 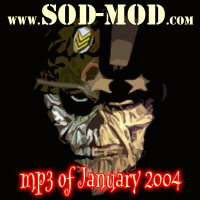 It's also time for some new mp3's. I promised you that I would upload a complete bootleg here. Last month you could download the first 11 tracks of the bootleg 'Pussywhipped'. I've decided that I won't take those mp3's down yet. Part two is available too from now! Click here to download 13 new tracks and get your bootleg complete.