As you've possibly already noticed, the lay-out of this S.O.D. & M.O.D. fansite is changing. After a couple of years I thought it was time for a 'new look'. A lot has been done already, there's a new menu at the left of this site, there are new backgrounds for the pages, but the content is still the same. A couple of new things will be added soon.

Next week I will add all info about the re-release of S.O.D.'s 'Speak English Or Die'. This 20th Anniversary Edition will be released in Europe on May 23rd by Megaforce Records. The tracklist and other info will be added as soon as I have a copy of this re-release.

Official artwork for S.O.D. & M.O.D.
In the last couple of months, I've had the chance to create artwork for upcoming S.O.D. releases as well as for M.O.D.'s upcoming tour. I am planning on adding a special page with artwork that was created by me only. I can't put everything that I made on this new page, only stuff that has been published already or will be published in the near future. You'll find this new page, with my artwork, here very soon!

Killith Fair 2005
I just mentioned M.O.D.'s upcoming tour. M.O.D. will be teaming up with Crisis and Jacknife for 'Killith Fair 2005' starting next June. At www.billymilano.com you can find info about M.O.D.'s new line-up. Further info can be found at www.killithfair.com. Posters and flyers for this tour will be available here in a few days.

MP3 of next month
There are 10 days left to download 'S.O.D. live at CBGB's'. Next month I'm going to upload a very special M.O.D. show, because M.O.D. will be touring at that time. I know that only a few people have a copy of this particular show, I've had a lot of requests for this bootleg. Billy gave me permission to use this show on my website, so you can download the first part in June 2005. Which show? It's a surprise... 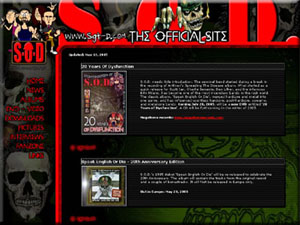 The new official website of S.O.D. is online again. I am proud to say that a lot of what you see at www.sgt-d.com has been created by me, together with The Webbastard and Billy Milano.

The site is not completely finished yet, we're still working on it. But please go visit it, there's a lot of great stuff on it already.

And YOU can contribute to it as well. If you have some really interesting material, like unpublished pictures, drawings or other memorabilia, send it in and it might get published. 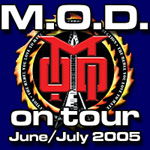 The tour will start at the Engine Room in Houston, Texas. After that there will be a lot of shows during June and July. M.O.D. will perform with the following line-up:

Billy Milano on vocals;
Scott Sargeant from Skinlab on guitar;
Huston from Brewtality on bass;
Mike Bennett from 40 Grit on drums.

Update (May 13):
Go to: www.killithfair.com for info about all bands, a complete tourscedule, mp3's of the bands and more!!! Or click at the banner on top of this newspage.

Last month I uploaded the first part of this show. S.O.D. did a couple of shows in December 2000 to promote the release of 'Kill Yourself - The Movie'.  This is one of these shows.

At the 16th of December 2000, S.O.D. finally played at CBGB's, the place where Scott met Billy. If you download part 2, you'll also hear this story as told by Scott. Another special track is 'Seasoning The Obese', because this particular song hasn't been played very much live.

Download part 2 now! It will only be available this month.
Enjoy!!!

Confirmed dates so far are as follows:

This time I took S.O.D.'s performance at CBGB's, the place where it all started for S.O.D. This is where Scott and Billy met. In December 2000, S.O.D. finally played a gig at CBGB's to celebrate the release of a new DVD.

I split this concert of almost 70 minutes into 2 parts, the first part is available for download now. Listen to the ballads, they're hilarious! There's more stuff that some of you probably never heard before. So, click here and download part 1.

March 7, 2005 -- Hardcore band M.O.D. will have "Bubble Butt" featured as one of the lead-in songs in the new show, 'Fat Actress', which will debut tonight, March 7, at 10pm on Showtime. The unscripted reality show is based on the real life tribulations of actress Kirstie Alley, who is previously known for her role in the hit TV show Cheers, for which she one an Emmy and a Golden Globe.

M.O.D. Lead singer Billy Milano comments: "I am honored that the song was chosen. I for one, can identify with the show."

MP3's of March
S.O.D.'s performance at Wâldrock was broadcasted by Dutch radio, sometime in 1999. And now it's available here. Last month you could download part 1 and now you can get the rest of this show. Click here for Wâldrock - part 2. Or just click at the banner. Enjoy!

Don't forget: these tracks will only be available for just one month.
Part 1 of Wâldrock 1999 is no longer available here.