You can find all info about this new DVD here. All concertfootage was shot by fans all over the world, it's a DVD from the fans for the fans. Billy wrote in the linernotes of the DVD:

"We have come to understand and appreciate what S.O.D. meant to each individual member of the group, but more importantly we finally understand that it was truly never meant to be. Only the fans have claim to what S.O.D. and its legacy stand for, and yet you can't help but feel that it is left unfinished and incomplete. Perhaps it's better that way. That people are left wondering and wanting what they may never get. It's kind of like waking up every day hoping it's going to happen today but always knowing it probably never will.

It IS great footage, don't miss this DVD. The DVD has been released in the U.S. first, the rest of the world will follow at a later time. Two months ago a re-release of 'Speak English Or Die' (20th Anniversary Edition) was released in Europe only. I have updated my website and included both items.

'What's the lesson here? Don't **** off with a belt around your neck," yells S.O.D. frontman Billy Milano performing the song 'Ballad of INXS'.

"Whoa...wait, they're not dead yet...but we will wait," quips S.O.D. while attempting to perform the hit song 'Ballad of Stone Temple Pilots'. 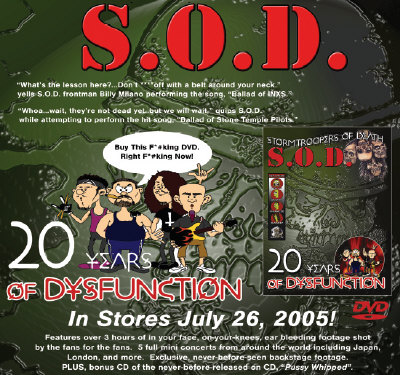 Features over 3 hours of in your face, on-your-knees, ear bleeding footage shot by the fans for the fans. 5 full mini concerts from around the world including Japan, Germany and more. Exclusive, never-before-seen backstage footage. PLUS, bonus CD of the never-before-released on CD, 'Pussy Whipped'.

Here's an S.O.D.-tv-ad (Quicktime movie) for the new DVD. 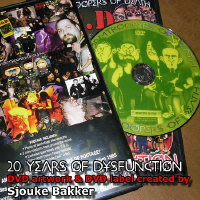 The owner of Pitfather.com contacted me when he found out that I created the CD-label for the '20th Anniversary Edition' of 'Speak English Or Die'. He saw the label and was curious about the story behind it, how I got in contact with S.O.D. and how my artwork got used for this classis hardcore/crossover album.

Because I also did the artwork for the new DVD, which will be released in the U.S. on July 28, that story was also included on Pitfather. If you're curious as well and if you want to read the story and see some pics of the artwork, visit Pitfather.com or click here.

By the way, I got the promo of the new DVD already last week and it rocks! It contains over 3 hours of footage, mainly shot by fans all over the world and lots more really nice stuff. You can expect a review and additional info about this new DVD soon!

M.O.D. also did a small tour in 2003, with a different line-up, to promote 'The Rebel You Love To Hate. One of these shows was recorded and mastered by Jeff Sebastianeli. Part one was available in June, part two is available now. Get this show complete and download part 2 here. 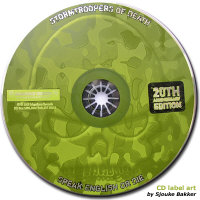 This is like a dream has come true. I wouldn't have guessed this when I started my S.O.D. and M.O.D. fansite a couple of years ago. A piece of my artwork used on my favorite album, who wouldn't want that?

It all started in the second half of 2004. Billy Milano approached me for the new DVD (20 Years Of Dysfunction), he wanted me to think about some artwork for it. So I did and Billy liked my ideas. We worked on it until we were satisfied about the result.The DVD with my artwork will become available next month.

I also created a few other things for S.O.D. and M.O.D., including the CD label art of the re-release of S.O.D.'s debutalbum 'Speak English Or Die'. There was another design already, but Megaforce used my Sgt. 'D' skull on the CD. It feels great to be connected to this album!!!

Today I've added an extra page to my website with some artwork that I created, including the CD label of 'Speak English Or Die' and the coverart of '20 Years Of Dysfunction'. Click here for my designs.

S.O.D. - 20 Years of Dysfunction - DVD with over 3 hours of live concert footage and backstage antics featuring The Ballad of INXS and The Ballad of Stone Temple Pilots. Street Date is July 28th. Pre-orders ship July 21st.

"We are officially done with rehearsals for this tour and we are ready to play-party and have a good time. Here are some pics from rehearsal.

We hope to meet everyone on the road so don't be afraid to come up and say hello.
Peace - Billy and M.O.D."

Only a few people have a copy of this bootleg, including Billy Milano. I asked Billy if I could use this show from September 24, 2003 for my website.  He said that it was no problem. I got my copy straight from Jeff Sebastianelli, who recorded and mastered this show.

The first part of the show will be available in June, the second part in July (during the Killith Fair tour). I've also uploaded some artwork for it. Download the first part of M.O.D., live at Connections 2003, here.

If anyone is going to record one of the M.O.D.-shows of the Killith Fair tour, feel free to send me a copy. Maybe I might use it as a future MP3 of the Month.