I just added 3 new S.O.D. liveshows here. Two of them are shows that I already had on video which I converted to audio; S.O.D.'s only show in 1994 for Rip Magazine and a show from October 1999. The third one is a show I recently got, I have it on audio and as an mpeg-file as well. It's a really nice show from March 2000.

MP3 of December
Last month I uploaded the first part of a recording of S.O.D.'s first liveshow ever, this month you get the rest of that show. I also included a scan of the original artwork that was used as the albumcover of this vinyl bootleg.

Because it's almost X-mas I decided to do something extra this month; I uploaded a video as well. It's the video of 'Seasoning The Obese'. I just love that song. The liveshow and the videoclip are both available here...

DVD review at Blastwave
From now on I will put the reviews for the new DVD here. The first one is written by Fim Vuego of Blastwave (Rock & Metal) and his review is really awesome. I totally agree with this guy. You get a very good idea of what the DVD is all about when you read his story. Go to blastwave for his review or click at this banner:

Special items update
Finally I found another show for my list of special items that I didn't have yet. It's a recording of S.O.D.'s performance in Detroit, March 25, 2000. It's a very nice show, a great performance and it has a good sound. I have the show as an Mpeg-file (on 2 cd's) and as an audio-cd as well (1 cd). More details about this special item very soon... 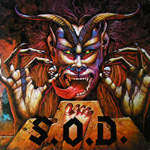 MP3 of November
A few weeks ago I finally managed to get the vinyl version of a bootleg of S.O.D.'s first show ever. I already had that show on tape, but now I also have a vinyl bootleg of the show that S.O.D. did on October 4, 1985. It's great to have this!!!

To make that possible, I recorded the album on my PC, split the show into tracks and uploaded part one (side A) to my website. You can download the first 12 tracks here.

My last interview with Billy was about a year ago. A lot has happened since then, so I thought it was time to ask Billy if he could give us some updates. I was very happy when Billy agreed to do another exclusive interview for my website.

Click at the banner (or here) for the entire interview. Enjoy! 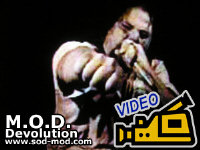 VIDEOCLIPS
Just recently I got hold of a bunch of M.O.D. videoclips, most of them I had never seen before. And I guess a lot of you probably haven't either. So I decided to upload one of these clips, instead of a bootleg show for a change. In November I will have a normal bootleg available again, but for October you get the video for M.O.D.'s 'Devolution'.

INTERVIEW
In other news, I will do an interview with Billy Milano again in a couple of days. I will be asking him about M.O.D.'s recent tour and future plans, forthcoming S.O.D. releases and more. So come back soon for this interview!

Last month I uploaded part one, you can download the second part now...
Enjoy!

LOUD Merch was started in September 2004 to help supply indie-bands with quality merchandise to sell at local shows and while touring. What started as an idea has developed into a FAMILY of bands, artists, and fans. S.O.D. has joined LOUD merch recently. There is now official S.O.D. merchandise available at this online store. If you're interested in S.O.D. shirts, you can order them at www.loudmerch.com/sod. There are 4 different designs available.

You can also contact LOUD merch at myspace: www.myspace.com/loudmerch

Last month Megaforce Records released a new S.O.D. DVD. The DVD-box also includes a bootleg CD of one of the first S.O.D. shows from 1985. Sixteen years later S.O.D. played their final show. At my website you get this last S.O.D. show from August 11th, 2001. The setlist contained mostly tracks that were written in 1985, except for some of the 'Ballads'.

You can also find a broadcast (28 minutes) of the Thrash Of The Titans show here. It includes footage of almost all bands, including S.O.D.!